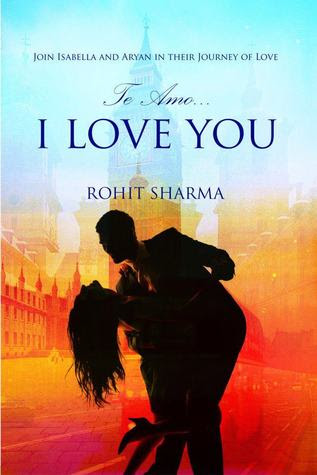 NOMINATED FOR COMMONWEALTH BOOK PRIZE - 2012
WINNER OF DEBUT AUTHOR OF THE YEAR 2012 - BY Butterfly and the Bee Literary and Book Marketing Agency.


Plot:
It is about two people - Aryan and Isabella - and their love journey. Aryan is not the one to believe in love. He had his reasons. The harsh marital results of his parents was one reason. But that was only until he met Isbella, a Spanish beauty. Unknowingly, both fall in love and get closer to each other like never before.

Isabella's father had already fixed her marriage with his business partner's son, Ethan. Ethan was a guy not to messed with, so Isabella in an attempt to save her love, Aryan, she gives in for her parents' decision and gets married to Ethan.

Ethan was also a brute. The cruelest when it comes to love. So Aryan decides to save her love, Isabella from him.

Will he succeed in doing that? By sacrificing her life, did Isabella really saved Aryan's life? What will happen to their eternal love?

My take on the book:
Actually, I have won a give-away of this book on GoodReads.com . A signed copy by the author himself, Rohit Sharma.

The first feeling I got when reading this book was that it so similar to the movie 'Kites' starring, Hrithik Roshan and Barbara Mori. The female protagonist is a Spanish beauty  The lead character, Aryan, is an Indian. Both love fall in love with each other incidentally but there is the problem, same like in the movie, of the female protagonist fixed to another rich, influential and evilistic villain.

The most irritating aspect about the whole book is you would find at least a couple of 'Gracias', three 'Te amo's and innumerable 'Love you's every page. I have never read Cecelia Ahern or Nicholas Sparks but if romantic novels are meant to be like this then I prefer giving away my copy of 'The Last Song'.

First of all, the book is 300-pages thick and the font size is so small that it could easily scare the day-light out of me. I got this book on a give-away, that was the only reason I started to read this book.

Every scene in the book is detailed. I felt such a description is very much unnecessary and the whole concept of saying 'Love you' every second line got on my nerve. I think it needs a good editor, actually they call them trimmers, who could cut off the crappy part of the book. I am sure after the trimming the book will be reduced to half.

At one point of the story, Isabella, who will be then the wife of Ethans - the villian - will elope with Aryan to Canada. For about more than 6 months, they spend there, never once giving away a clue to Ethans. And for those 6 months, Ethans keeps looking for them but in vain. According to his description in the story, Ethans is one of the most powerful personality in America and in Spain. If he was so powerful, he could have easily traced the couple's location through their passport details. Or maybe using his connections he could have inquired the local airport authorities about destination to which an Indian guy and a Spanish guy left on that day. And another flaw is that Isabella and Aryan both were in contact with Isabella's father. Ethans could have trapped the call Isabella's father got and trace their location.

It was so foolish. How could anyone be so naive and leave so many big flaws in the story?

Very poorly edited  Though I didn't find many spelling or grammatical mistakes, I think there is lot of crap that should shortcutted.

But the climax was pretty unexpected for me. At least I didn't such an end. And then came the epilogue which had an unexpected end, too. Maybe the story was not bad, but the whole crap made it worse.

Over all, good novel, thick and bur boring, story too much filmy, read it on your own wish.

Recommendations:
To romance lovers. To those roman lovers, who don't have anything to do with practicality but love and romance...

A review I came across on Goodreads 
Wow. That was the first. Please someone tell me this review - Or the so called 'Comment' - is not directed at me.

Ashwina, first of all, hope you are not fictious - like this book. Are you really kiddin' me? Maybe this book was better than the 4 other books on your list. Of course, I agree the author has done a very hard work. I don't want to bring author into this.

You better watch 'Kites' one more time. Better get one with a subtitle. Then, we will continue the talk about it.

And, by the way, that last statement - "And all those people should try writing a book." - that was more than provocative. You should try reading better books. Try spending a little more than 60 bucks a book, you will come across better books.

Also, go get a life. Keep your views from pointing to others and stop guiding people to waste their money. Kudos.
Posted by Sundeep at 10:59 PM