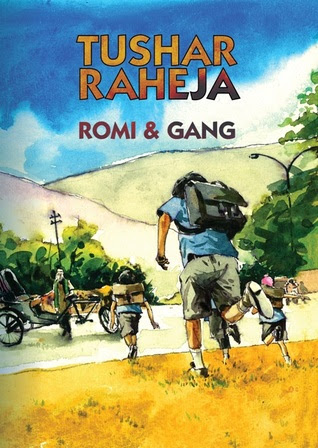 
Exactly seven months ago, on this same date, I have posted my review of Anything For You, Ma'am by Tushar Raheja.

I could recollect enjoying it very much. Though it lacked romance and a appealing story, the humor and the narrative style kept me going.

I think that is one reason for publishers of this book to contact me for reviewing.

One day, when I was lost somewhere in South India, exploring the amusing beaches and girls of Goa, the Books Reviewwala's mail box got a mail from someone named Pirates. They inquired whether we would review Tushar Raheja's new novel - Romi & Gang.

I first came to know about this book from HomeShop18.com. It was featured in the 'upcoming releases'. The cover design and the big fonted name of the author made me open the details of the book impulsively. I was to buy the book, when I decided to read the description of the book. Well, post that, I gave up the idea to read the book. The word 'cricket' stopped me. I know that it must have the otherwise result with other guys, but, for your information, I am not much of a crickets' person. Other than that, I was more than willing to read the book.

When I received the review request, I readily accepted to review it. Lemme give it a try, I thought.

It is only after I received the book and checked it cover out that I came to know that Pirates are the publishers of the book.

After quiet some days after the request from the publishers, I have received the book from Snapdeal.com. It was rare for me to receive review copies of books through a commercial online shopping portal. Worst of all, when I received this book, it had a crease in the middle. The book was bowed inwards and my heart literally bled. I mentally resolved to never shop any book from SnapDeal. Resolve taken, I read the book and am writing the review, finally. Happy reading...

Plot (from the jacket):
Unruly and reckless, thirteen-year-old Romi is the hero of his universe. His great affinity for adventure and the unknown is shared by his gang - the rascal Sukhi, the deadpan Sunny, the naïve Golu and his blood brother, Kim.

When legendary Kim disappears from Mauji, it is left to the four to conquer the maidan with cricket and the world with their wits. Of course, they must prepare for responsibility in between and, one day, go after Kim.

My take on the book:
Cover design:
About the cover design, this book gets a thumbs-up from me. The animate kids running with bulging school-bags is more than apt to the story. In fact, it depicts the four lead characters of the story. The colour and the portrait-like texture just adds to the awesomeness of the cover. I am sure any person who comes across this book, will surely pick it up and reads about it. Once if he ruffles through the book, he should definitely take it with him to the cash counter. The illustrations are too tempting to overlook.

Illustrations:
When I first browsed through the pages of the book, I was reminded of my non-detail text book back in my schooling days. If I am not wrong, it was either 'Hound of Baskerville' or 'Prince and the Pauper'. Every chapter had one or two illustrations of a scene from it. Though, they were of little help for the narration, the illustrations just adds to the thriving to read the book.

At every illustration, I used to spend a whole minute or two and then carry on with the narration. The fact that the illustrations are seldom found in the now-a-days novels just intensified my love for this book.

Language:
Already having the first of the author, I was aware of his complex and witty use of words. Though, I knew not the meaning of many words used by the author, I was able to understand and enjoyed his witticism in his first book. I was expecting the same type of narrative style in this book, too. But surprisingly, I was proved wrong. This book had a simpler narrative style. Not too simple, nonetheless. Just simple enough to make it an enjoyable, breezy read.

Publishers:
Pirates. It was a wierd name for a publishing house, I thought. Well, neither does Penguin nor does HapperCollins sound much like publishers. I guess this is the first book they ever published. There ain't any other books from them. Not that I am aware of. However, I was pretty satisfied with the book, want to share the submission Email ID for to-be-authors. The last line of the last page of the book read, For submissions contact - captain@pirates.ind.in. Well, a hearty congratulations for the publishers and hoping to read more good books from them.

Story and other aspects of the book:
The major turn off I faced about this book is that of various things, it vitally revolved around the sport, cricket. Not that I hate it, but the terminology used in the book is no better than Greek and Latin to me. I couldn't decipher much out of the description of the match. This drawback could be purely personal, because most of the Indian men love cricket and would be more than elated to read this book. Again, FYI, I don't hate cricket. If going by the words of my words, I am a pretty good batsman. Its only that I prefer playing than watching.

I couldn't help but sense an unannounced raging trend of writing stories of teeny kids about their adventues - like The Adventures of Tom Sawyer. The other book about which I felt the same was, The Virgins.

The book was smaller in size, when compared with other typical paperbacks. Even the font size is bigger - or rather, typical. The white space in a page is good enough to not scare the shit out of the reader. In simple words, it is supposed to be a quick read, with 237 pages thick. But it took me two full days to read and write the review for this book. It is that kind of a book, which is very intriguing but you are can't read it too fast out of fear of completing it faster.

It was rather a nostalgic read. I have seen my reflection in many parts of the story. In fact, any average middle-class Indian would be able to relate himself with one of the four lead characters.

The climax of the story has disappointed me no end. I think there could be a better ending. Perhaps, the better ending would be what every reader would be expecting so the authors turned the entire story around. Maybe, he was trying to put some practicality or truth into the story, but I think the end was pretty letting down. Worse for the book, the end is the last impression that leaves any spectator - in this case, the reader.

Final Verdict:
It is totally upon the reader to decide whether to read this book or not. I couldn't exactly settle upon one option about this book. But I could say, it is a very enjoyable read for people with minimum knowledge cricket. A enjoyable, nostalgic, sporty read...

Recommendations:
I would like to recommend this books to all those cricket-lovers and who want relive their school days of cricket, friends and adventure, again.

Reviewed for: Pirates (The publishers)

For a better deal of this book, click this: