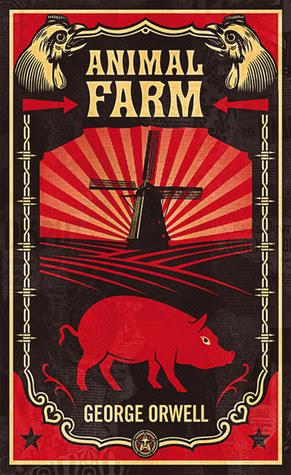 Review:
Note: This book is best if the reader has the fundamental knowledge of the Russian Revolution and Stalin era.

Plot:
Tired of their servitude to man, a group of farm animals revolt and establish their own society, only to be betrayed into worse servitude by their leaders, the pigs, whose slogan becomes: “All animals are equal, but some animals are more equal than others.” Published in 1945, this powerful satire of the Russian Revolution under Stalin remains as vivid and relevant today as it was on its first publication.

I always had a notion to read this book. The name, Animal Farm, was too much for me to resist. I have always been a animal-enthusiast. (Yeah, I pay more heed to the name of the book than the plot. In fact, I had very little idea about the plot of the book.)

The other reason was the thickness of the book. It is damn difficult to resist a well-known classic novel which is seldom 100-pages thick.

There was a fact in the 'A NOTE ON THE TEXT' section of the book. My mother tongue is Telugu and, I learnt from the note, that this one of those few classics which were translated to Telugu. It also states that many versions of this book has been freed of the original subtitle - 'A FAIRY STORY'. The statement goes like this: "Only in Telugu, of all the translations made in Orwell's lifetime, was A Fairy Story retained."

It was only after I came to know that the fundamental knowledge of the Russian Revolution was needed to understand the satire in the novel, I felt disheartened and thought that I should have paid a little attention during my history classes.

To speak of the language, it is the best. No hard words. No undecipherable sentences. Everything was straight-forward. Every was easy to understand. Awesome language, I would like to call it.

Actually, I enjoyed the story even when I know nothing of the Russian Revolution and Stalin era. Though the story was indicating satiric actions equivalents of the happening of a historic event, it was as good as a good fiction novel. Of course, pigs learning to read, talk and dictate over other animals seemed absurd, but it was pretty entertaining. Perhaps, I would have had a better experience of the book, if I had a minimum knowledge of the historic event.

Also there were more than one instance, when I was reading this book and I fell asleep...

Recommendations:
I recommend it to people who have the essential knowledge of the Russian Revolution and Stalin era. I don't know what you would feel during the read.
I also recommend it to those who are in search of a quick, entertaining read.