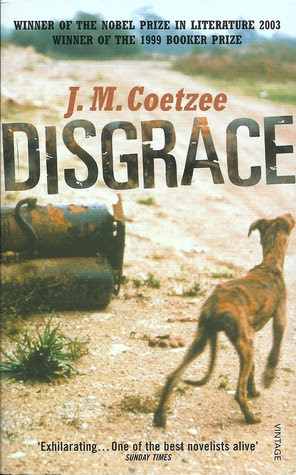 A divorced, middle-aged English professor finds himself increasingly unable to resist affairs with his female students. When discovered by the college authorities, he is expected to apologise and repent in an effort to save his job, but he refuses to become a scapegoat in what he see as as a show trial designed to reinforce a stringent political correctness.

He preempts the authorities and leaves his job, and the city, to spend time with his grown-up lesbian daughter on her remote farm. Things between them are strained - there is much from the past they need to reconcile - and the situation becomes critical when they are the victims of a brutal and horrifying attack.
In spectacularly powerful and lucid prose, J.M. Coetzee uses all his formidable skills to engage with a post-apartheid culture in unexpected and revealing ways. This examination into the sexual and politcal lawlines of modern South Africa as it tries desperately to start a fresh page in its history is chilling, uncompromising and unforgettable.

My take on the book:
I am a person who picks books by its good cover design rather than the book with a good plot. There is a dog on the cover page. Dog enthusiast, as I am, I blindly picked it up and started reading. Believe me, dogs have very little - or nothing of important role - in the whole book. Again, believe me, ever since I started reading this book, I dozed off. A note to readers like me. Never read this book before going to bed or while lying on bed. You will never know when you doze off.

It is the winner of Booker Prize - which was then not called 'Man Booker', just 'Booker' - in 1999. Probably the judges then and now aren't the same, because a prize won by a book like Life Of Pi and Sense Of An Ending couldn't be won by a book like this one. This is too boring for the prize.

This books is more similar to Sense Of An Ending, if you have read it. Too much into emotions, but narrated in the third-person style unlike the previous book.

At the start of the book, it was good. Not to mention, better than the rest of the book. The book starts with the description of David Lurie's - the protagonist - sex life. The starting line is,

For a man of his age, fifty-two, divorced, he has, to his mind,
solved the problem of sex rather well.

Yeah, the story centers around sex and the feeling following the deed.

Recommendations:
I wouldn't recommend it to Booker fans. Although, the impression of this book is widely unstable. It gave a boring impression for me. It might give a enriching read for someone else. So readers read this book at your own risk.
Posted by Sundeep at 6:11 AM