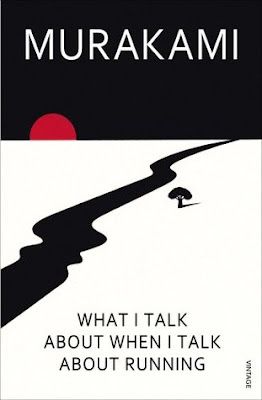 In 1982, having sold his jazz bar to devote himself to writing, Murakami began running to keep fit. A year later, he'd completed a solo course from Athens to Marathon, and now, after dozens of such races, he reflects upon the influence the sport has had on his life and on his writing.

Equal parts travelogue, training log, and reminiscence, this revealing memoir covers his four-month preparation for the 2005 New York City Marathon and settings ranging from Tokyo's Jingu Gaien gardens, where he once shared the course with an Olympian, to the Charles River in Boston.

By turns funny and sobering, playful and philosophical, this is a must-read for fans of this masterful yet private writer as well as for the exploding population of athletes who find similar satisfaction in distance running.

My take on the book:
Murakami. Though there are so many books to be read, so many new authors to be explored, way too many plot to be enjoyed, I decided to read Murakami. Again. Only this time its a non-fiction; a memoir.

Being a huge fan of his work, I was filled with this obvious excitement of getting to know him. You know, if you are familiar with his work, you understand why its obvious. So varied are his works; so wild his imagination; so metaphysical his stories.

I had a friend who - also introduced this brilliant author - was a bigger fan of this man, which left me familiar with the snippets from the author's life. Like even before I started reading this book, I knew that Murakami sold up his club to be a full-time author; the exact moment it struck him that he could be an author; that he is obsessed with running - which are all part of the book. But the thing is that my friend here gave away all the best things about this book that during the course of the read I felt really deviated.

Getting straight to it, I was really disappointed at the author's life. So wild were his stories, I wasn't ready to be satisfied with an ordinary man's story. A lot of silly things disheartened me. Like, for instance, the author gave up smoking. Which must've been obvious that the book is about running and runner are bad smokers. But, hey, this is Murakami we are talking about. Name me a story that he doesn't describe at least one key character a smoker. Not that I've read all his books, but then Murakami had such an image in my mind. Listens to jazz, Beatles, the classic rock bands, Mozart; a pure classic, I mean.

These silly things have really disturbed to a point that I was finding it troublesome to read this book. How can Murakami be so dreadful about ageing? It was like he was trying to get in terms with his ageing through writing this book. Or maybe I am too young to judge about that issue.

But then, with those things done, as the trudged further, it showed. The typical Murakami style of seeing and feeling things. It started to feel that he was not as ordinary as he made it seem till then. And by the end, I was happy the way it ended. I mean, my ego was satisfied. I had got what I was expecting when I paid for this book.I totally understand, its purely judgmental of me, but then, hey, I'm am a reviewer.

Overall, I would suggest this book for those hardcore fans of Murakami and those for whom running is more than, well, running itself, not just running.