A Flight of Pigeons by Ruskin Bond 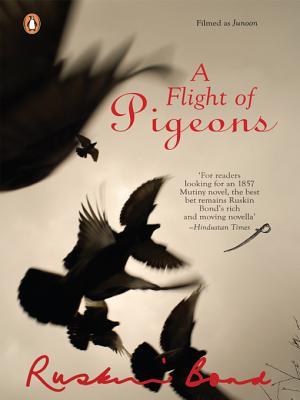 Set in Shahjahanpur during the revolt of 1857, A Flight of Pigeons is Ruskin Bond's classic novella about the twists of fate, history and the human heart.

When Ruth Labadoor's father, a clerk in the British magistrate's office, is killed in an attack by sepoys, her family seek refuge with their trusted companion, Lala Ramjimal. From here they eventually hope to escape to their relatives in Bareilly. But their plans go awry when Javed Khan, a fiery Pathan opposed to the British, abducts Ruth and her mother and takes them to his haveli. To their surprise, it is not hate that impels him in this time of war, but an almost crippling passion for Ruth. It will be months before the fall of Delhi to British troops brings them freedom—from fear, bafflement and despair, not only their own but also Javed Khan's.

Based on true events, A Flight of Pigeons is a haunting story, rich in detail and drama, told with simplicity and deep humanity.

My take on the book:
What the above blurb doesn't quote is that the movie was made into a film directed by Shyam Benegal, starring Shashi Kapoor, named Junoon. The kind of reader that I am would have immediately sprinted off to watch the movie at any means. The pleasure of watching the visual of the story you have just read is magnificent. But then, I haven't done that in this case. In fact, maybe, I wouldn't have read this book if I had paid a close eye on the blurb.

Historical Fiction is one genre - of course, after Chic-lits - that I dread the most. The years and falling back on things aren't my area of interest. I started to read the book at random. I wanted to read Ruskin Bond and this one stood out with it's flying pigeons cover and it's thin stature. So I chose to read it, without as much as glancing at the blurb.

The story is just what the blurb describes. Like I had said history is not my thing, so I don't know what to talk about this book. On the other hand, it was not that bad either, but a bit boring. Maybe, I couldn't picture Ruskin Bond, all aged, narrating a story in the perspective of a sweet, young girl.

Yet I loved the way he got about it. It was straight-forward. He hadn't tried to delve into the details of the girl's feelings, which is for better considering this to be a work of fiction based on true events. An probable account of the event.

Overall, it was a not so recommending read. Perhaps, it is the least rated book from me to Ruskin Bond - ever, I am sure. However, it is purely my feeling and people who find the blurb interesting must do read it. Because History is not half as bad as I portray it to be...

Title: A Flight of Pigeons