Seven Days Without You by Anmol Rana 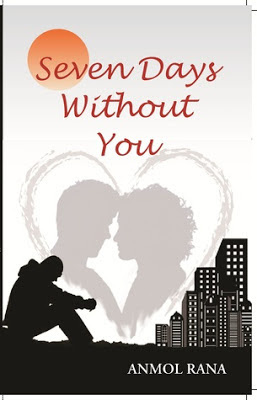 
TheTalesPensieve.com i.e., Reshmy Pillai, have been very generous with her giveaways. This book is one that I have won that way.

After quite some time, I started to lose hope that I will ever get this book and got on with reviewing other books. But, out of the blue, this book landed at my doorstep. By then, I had a whole lot of books to review and then, I was off on a trip. Eventually, the reviewing got delayed and I really am sorry for that, Reshmy.

The other reason for my delay is the book itself. It was so big; it took this long to get on with it. I can't digest the fact that the book is just the story of seven days!

‘Seven Days Without You’ is a story of two childhood friends that finds its destiny only when they live seven days away from each other. What the joyous life of years together couldn’t unearth, was dug out by the heart breaking realities of seven days that were no less than a new life for him– one where his child hood friend was not with him.

The protagonist, Vishwas is all set for his first job. Enthralled with excitement the small town ‘mummy-papa’ boy leaves for Delhi and would return after seven days. His seven days without Shailja do not happen as he thought they would. His dreams ruined, expectations shattered and fantasies turned into nightmares, he realizes that life isn’t as simple as it looked from the balcony of his room.

Fun, joy, excitement, sorrow, disgust, embarrassment, deception and then LOVE… Seven days teach him the perfect definition of every sentiment. The battle of emotions and confessions that lasts for seven days transmutes his years old relationship into something else and his heart overflows with the love he thought Shailja would never kindle inside him.

What happened in those seven days that gouged his love out of friendship?
Will Shailja still be waiting for him after these seven days?

And will she reciprocate his love...?

About the author (from in between the covers):
Anmol Rana, 35, was born in Dehradun, and completely his education from Mussoorie and Dehradun. A Postgraduate in science, he is currently working as a scientist in Defense Research and Development Organization (DRDO), in Dehradun. His native people is also Dehradun and he is settled there with his wife, parents, and two kids.

He belongs to an orthodox Indian middle class family where dreams are only restricted to sleep. He dared and turned his dream into a reality. 'Think Different' - is the rule of his life, even if it is thinking alone. A son, a husband and a father now, he lives one portion of his life for himself as well. The portion where he listens to only one choice - the voice of his heart. Right and Wrong have no count there.

Writing was like a hidden treasure he discovered only recently. But when discovered he invented himself into a completely new person in the form of a writer. The English language scares him, but call it an irony of the education system that he can write only in English.
Slightly introvert by nature, he believes in understanding rather than saying. A scientist by mind and a writer by heart, he loves playing soccer and chess. Music comes naturally to him, and if you were to believe his friends, they say that he is a far better singer than a writer.

This is his first book, but no the last.
You can reach him at:
anmolrana.7dwy@gmail.com
http://www.facebook.com/SevenDaysWithoutYou

Well, what ever it is the cover design of the book is very disappointing. It might sound harsh, but I don't think a reader would throw a second glance at this book. Let alone, picking it up and reading the plot.

It felt like a work of self-publishing. All simple and amateur to the core. As far as the cover design is concerned.

Publishers:
Frog Books. When there were no promotions of the other books from the publishers on the front and back covers of the book, I came to a conclusion that they are new to the industry. On close inspection, I noticed that this is - just like Platinum Press, which publishers books like Arjuna and Asura - another imprint of Leadstart Publishers.

I couldn't reckon why, while their others books had a great cover designs, this one had such a inferior design. Whatever could be the reason, I didn't like the injustice showed by the publishers to different authors.

On the other hand, I noticed the same style of imprinting the prose, like in Arjuna. There was a double space between the paragraphs and  no space at the start of each paragraph, which is seen typically in any other books. I guess, and I take great pride in my observation, that it is the publishers' signature of printing.

Language:
It is kind of the language I most admire. The use of simple words by author is just awesome. Though the language was simple, the author littered just exact amount of complicated words to the prose which is more knowledgeable than hitches. The metaphors used were just brilliant. I always admired the authors who use witty metaphors because they, metaphors, don't come to me, however hard I try.

Story and other aspects of the book:
First of all, it came as a shockers to me that there are in total only seven chapters in this book - Day one, Day two ... Day Seven! The book is a whole 340 pages thick and weights good, courtesy: the good paper quality, and there are just seven chapters! That is when I realized the actual weight of the title of the book - Seven Days Without You. The story is of only seven days.

How can someone write 340 pages only about 7 day, I wondered before reading this book. Well, the author has just done it and you are reading the review of the output.

It is the of a common guy, Vishwas, who belonged to a conservative middle-class family. He embarks to Delhi, to report for his first ever job as a well-paid Software Engineer. He has a childhood friend named Shailja. During his journey to Delhi and back, which take seven days, the story plays. On his way back for the weekend, he was not only returning to his hometown, but also to the love of his life.

The most of the story deals with his encounters over the journey, the mishaps, the adventures and the likes. To some extent, the story is interesting. The witticism of the author is enough to intrigue the author.

On the other hand, I felt there is too much shit in the book. Even the poor editing adds to the poor-quality of the book. Considering the quality of narrative style of the author, the book could have used a great deal of effort on cover design and the editing.

Also the book lacked the reality quotient. Though it is a complete work of fiction, it must contain reality all the way. However conservative a man is, he will loose control over his hormonal surges. In this story, there is a scene where the author is seduced by his female boss, who is unquestionably sexy as per the story, but the protagonist simple evades her. And when provoked further, slaps her. I am very disappointed at this turn of events. Okay, yaar, the protagonist maybe from a middle-class, conservative family, but come on, he has hormones, too. Didn't he feel sexual feelings for other girls like Nishika and Vaijanthi (other girls in the story). After all, he is not that conservative and I don't think a ordinary guy in his right mind will ever overlook a chance of banging his boss, even when she takes the first step. Very absurd!

Some might argue that the book is all about emotions, love and feelings, I think that the book contained too much stuff to bore any reader. A great deal of details could be cut down to interest the readers. After all, the readers shouldn't be scared at the very size of the each paragraph, should he? Though the story is really exciting and could a page-turner, the monotonous details spoil the very thrill in the story.

Final Verdict:
I say, the book needs a better cover design and a good deal of editing/trimming.

Recommendations:
I would recommend it to those romance lovers who love reading story Indian contemporary stories. They will enjoy this book very much.


Title: Seven Days Without You