Caravan to Tibet by Deepa Agarwal 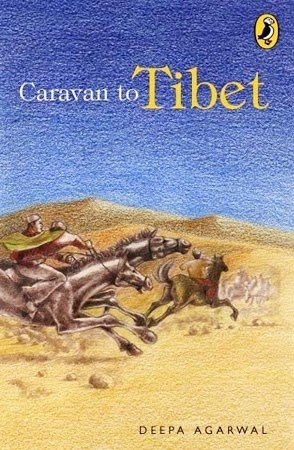 'The thud of hooves hammered at Debu's ear, the swishing of whips, the shrill exclamations of the boys goading their sleeds on. Slowly, steadily, they left one horse behind, then another, than another.'

In the last years of the nineteenth century, a caravan of traders sets off from the high hills of Kumaon, India, for Tibet. They traverse dangerous passes and brave blinding snowstorms, in order to carry on their traditional trade in the Tibetan markets. Among them is fourteen-year-old Debu’s father. Many days later, when the caravan returns, Debu is heartbroken to learn that his father was lost in one of the treacherous passes. Somehow he cannot believe it, and when a Tibetan trader turns up in the local market wearing an amulet remarkably similar to his father’s, he is convinced that his father is alive, somewhere in Tibet.

Debu joins the next caravan to Tibet to look for his father, little knowing he is setting out on the most perilous, yet most exciting journey of his life. The adventures follow thick and fast—a forced stay in a monastery with a young lama who takes a fancy to him; his capture by a band of bandits led by the cruel, mysterious Nangbo gifted with magical powers; a stay in the goldfields of Thok Jalong; and finally ending with a heart-pounding, breathtaking horse race.

An action-packed adventure story, Caravan to Tibet teems with memorable characters and fine descriptions of life in the Himalayan kingdoms of Kumaon and Tibey at the turn of the nineteenth century.

My take on the book:
I was to start the review by immensely thanking the author for sending in a signed copy of her book...

The genre 'Children's book' made little sense to me. I mean, I don't see anything childish about it. In fact, I enjoyed everyone of it I've ever read till now. Of course, there are not love-making scenes, but does that make it childish?

Yeah, language. Children need simple language. That could be one criteria every children's book must satisfy. But this book had language, way more deep. Even I had to scurry through the dictionary to fetch the meaning of few words from this book. I wonder, what is the state of the children.

When I was contacted to review a children's book, I was pretty excited. I had already read about three other children's book and, to be frank, they were fun. I pretty much enjoyed them, despite being absurd. But this time, I was offered to review either of the book and I chose this one - Caravan to Tibet.

The moment I read the blurb of the book, I knew it was my kind of a book. Seriously, it had all the travel, adventure I ever seek in a book.

Debu search for his father in itself portrays a deep purge of emotion. He sets off on the next caravan to Tibet. So starts the story and is unputdonwnable until the very last page.

There are emotions, magic, adventure, thrill, midst all these the beautiful description of the scenic Tibetan landscape, making this book a unforgettable story. It leaves a lasting impression in your memory. And the thrill, it just leaves you wanting for more and with a crave to re-read it...