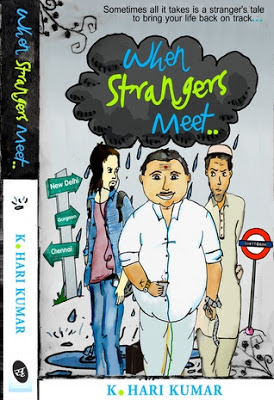 I have received this book for reviewing from the publisher, himself. This is the third book - after The Homing Pigeons and The Secrets of the Dark - that I received from these publishers this month.

If you come to read my reviews of The Secrets of the Dark and The Homing Pigeons, you might have understood I have literally become a fan of Srishti Publishers. Maybe, there are someone out there who might be thinking that I have been writing positive about the book because I was asked to review, read any of these three books and you will realize the fidelity of my reviews. In fact, it is a shocker even to myself that all the three consequent releases of Srishti Publishers are so wonderful.

Plot (from the jacket - hand typed):

What happens when Jai is stranded at the Metro Station with an irritating stranger called Iyer and a mysterious Pathan?
How will the tale from Iyer's past effect jai's future?
And why does the mysterious Pathan keep staring at Jai?
What happens inside that small room of the Metro Station?
Nobody believes Jai when he claims that 'He was there!'. People think he is crazy. But is he?

The story revolves around Pathan, Jai and Iyer, and their tryst with each other's destiny.
A light-hearted drama with a heavy tint of suspense that captures father-son relationships from the viewpoints of three different strata of society.
Action, Comedy, Romance, Drama, Suspense... A typical Bollywood fiction...

A touching tale about choosing between the paths of our dreams and their expectations.

Three men.
One fateful day.
A small room.
And a story of a lifetime...


About the author (from the jacket, too):
K. Hari Kumar is working as an Assistant Director in the Indian film industry. He has written, acted and directed four independent projects that have been screened in various film festivals.

The plot:
Though the blurb mentioned on the back of the book and that which is mention under the plot, doesn't portray the tenth of the enthusiasm that the story holds for the reader. I assure you that the story is far better than the plot sounds. Here, let me try to give me give a alternative plot of the story.

Pathan, Jai and Iyer on a fateful day come to meet in the rest area of a Metro Station in Delhi.
Each of them are different in their both economical and societal backgrounds.
Jai is young boy full of ambitions and dreams of his own. He runs away from his home in the hope to pursue his dream.
Pathan is from a poor background and he is on a journey that would change his and his gamily member's life forever.
Iyer is a typical South Indian Brahmin, whose story would fill up the most of the pages in the book.

This is the story of how Iyer's meet with Pathan and Jai, changed their future lives.

That's the basic idea of the story.

Narration:
It is very typical how the author's narration keeps on fluctuation. One moment, I was like I could never write like this author. The very next paragraph I feel like anyone could write better than this other. Throughout the read, my feeling kept fluctuating between these feeling. Now, even after completely reading the book, I can't judge the author's language used in the book and his style of narration.

Author lost his marks in my books only the aspect of his writing.

Publishers:
I would specifically like to thank Arup Bose for asking me to review this book for him. I am glad I read this book. Even the other two books sent by him were equally enthralling.

After I too had a love story, I have come to read three amazing books from Srishti Publishers.

Off the records, the best part of receiving the books from the publishers is their bookmarks. Check the photos at the end of the review for the photos of the Publishers exclusive bookmarks I have received with this copy of the book.

Cover design:
If you have a look at the cover design of the book, you will notice three character - a funky guy with long hair to the left, a Pathan in Kurta to the right and a fat person with Tilak smeared on his forehead and with a cup to the middle. The cover picture seemed apt as the whole of the story revolves between the three of the characters.

Above all, I loved the back cover of the book. It is unlike the back covers of the other books, which contains the description of the story and a few lines about the author with a small square of his picture. 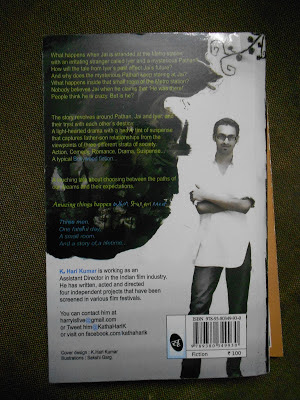 I loved the very idea of author's embossed, full length photo on the back of the book.

Story and other aspects:
The prologue starts with the second-person narration of Iyer smoking in the train (which was, according to the Indian Railway Association, illegal), which is heading Delhi. Following ancient tradition of prologue-writing, the prologue starts in the middle of the story and leaves us confused as hell.

Then the first chapter starts with the thrid-person narration of Jai's life.

Somewhere between the story joins the Pathan of the story.

Both of them end up in the rest area of a Metro Station, when our Iyer, the probable protagonist - because best part of the book is filled by his story and he is the reason for the mind boggling twist - enters the scene.

Like I have mentioned in the above part, the language was a drawback. Two entirely different feeling run parallel and keep fluctuation throughout the read. It is either amateurish or very intriguing. Also, it needs a good deal of editing. If not for these drawbacks, the book is a perfect-ten! (A very rare in the case of this blog.)

During the first-person narration of Iyer's story, there were many Tamil phrases used in the exchange between the characters, which is a plus point. It gives adds the realness to the narration. Being born in Chennai and brought up in Hyderabad, I am pretty good at understanding Tamil language.(However, my Tamil speaking skill is a disaster.) So I understood the Tamil phrases used in the story easily. I am certain the author has been to or from South India, or else it wouldn't have been so easy to throw in those Tamil phrases which were in perfect sync with the setting.

Owing to not bore you, I end this review fast and with a good note saying that this book is worth reading at least once. It is very rare I like Drama, but when I do, it is helluva Drama, I say.

Recommendations:
Especially for the starters. People who are starting out reading lately should read this book. The flaws and the editing overlooks might not count much for them. For others, it depends on their interest. If you value a good story, you must read it. Or else, if you pay attention to the narration and language, I think you must give this book a second thought. Story is given highest importance in my books, though...

Tagline : Sometimes all it takes is a stranger's tale to bring your life back on track...

Reviewed for : Arup Bose (The publisher) 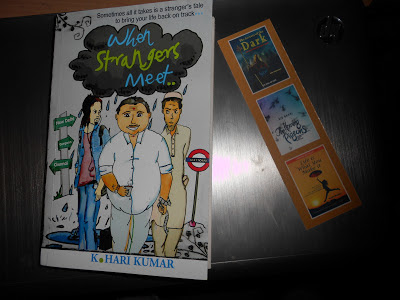 I just love their bookmarks... 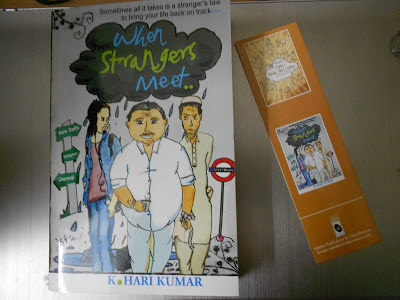 I love their way of marketing...