I was contacted by the author, herself, for reviewing her book. I readily agreed without even throwing a glance the description of the book. Born and brought up in the urban area, there was no one to tell me stories of Mahabharatha, Ramayana and various other Indian epics. Ramayana, I have seen it in a cartoon series, but I have heard that Mahabharatha was a very lengthy story and it was best experienced when told by ones grand-parents. That's how many epics are retold in India - one's grand-parents narrate the story during bed-time or in the early morning.

All the while, I came across bits and pieces of short stories, which are part of the main story, the very thought getting to know the entire story was very much thrilling. And finally, the book proved its worth.

Plot (from the jacket):
Arjuna is the immortal tale of one of India's greatest heroes. These pages retell in riveting detail the story of the Pandava Warrior-Prince who has captured the imagination of millions across centuries. This is the intense and human story of his loves, friendship, ambitions, weaknesses and follies, as well as his untimely death and revival, his stint as a eunuch, and the innermost reaches of his thoughts.

Told in a refreshingly modern and humourous style and set against the staggering backdrop of the Mahabharata. Arjunas story appeals equally to the average, discerning reader and the scholar. It spans the epic journey from before his birth, when omens foretold his greatness, across the fabled, wondrous landscape that was his life.

About the author (from inside the book):
Anuja Chandramouli is a full-time mother of two lovely girls, as well as a part-time writer. Her academic credentials include a Bachelor's degree in Psychology and a Master;s in English. Having started out as a freelance writer with articles published in Women's Era, Lonely Planet and The Hindu, she currently works as an e-reported and columnist.

Anuja is a self-confessed, big-dreamer, who is driven by an inner passion to contribute her mite to great pool of human endeavor, thought, and wisdom. An ardent admirer of Veda Vyasa's Mahabharata, Anuja holds the Great Epic to be one of a kind, the Homers and Virgils of the world notwithstanding. Drawing her creative inspiration from the epic's timeless track record of sustenance through centuries of retelling, Anuja chose to debut as a storyteller with the immortal and eternally captivating saga of Arjuna, the non pareil hero. Putting together episodes from Arjuna's life (some well known, others relatively obscure), gleaned through years of painstaking research and then presented in a seamless narrative with the uninhibited panache and style of a 21st century writer, has been an immensely satisfying and self-actualizing endeavor for this New Age Indian classicist.

Chandramouli can be reached at: anujamouli@gmail.com

My take of the book:
Cover design:
I don't see any significance of the cover design to the story. On the whole, the cover design in woody is texture. And then, there is a tree like design on the front-cover. I don't have any idea, nor the knowledge, of the link between the tree and Mahabharatha. On the contrary, I can't be sure that it is a tree. It could be something else.

Publishers:
Leadstart Publishing. Lately, I have come across quiet a few books from these publishers. Even Asura by Anand Neelakantan, the book Srinivas - the other almost non-existent author of this blog - is reading, is from Leadstart Publishers. There are few books depicted in the inside of the back-cover of this book. I must say, most of them seem native, deep-in-thought and classy.

Looking forward to read more the books from this publishers.

Language:
The language is one aspect of the book that gives the retold epic an impression of a historical fiction. Meanings of many words expressed in this book are even unknown to me. I only understand the meaning of those words under the pretext of the sentence. It is both a positive and negative point at the same time. Negative because some readers might not decipher the actual meaning of the word and might start hunting for the meaning in the dictionary. Positive because some readers might like those kind of complex words. Also the pretext makes it easy to understand the instant meaning of the word and I didn't find much trouble deciphering their contextual meaning.

Overall, the prose included few unusual words, which you might have not come across before, if you are a vivid reader. If you are vivid reader, you won't be having much trouble with the prose, I assure you.

Story and other aspects:
The book contains typically the story of Mahabharata revolving around the untold hero of the epic, Arjuna. The story of pandavas, especially Arjuna, from the very birth to the moment they all died getting transported to the other side of the world.

The language and prose used makes it sound more of a story than a great Indian epic. It is one reason to keep you going on and help you from the monotony of the story.

When I turned pages to the first page of the story, I was shell-shocked. Right after the page of contents, is the page of Select Cast of Characters. It literally, meant the names and relations of characters from the entire story. The dreadful matter is that it four whole pages! Just imagine, reading a story which has characters of four whole pages! Firstly, it would take a week or two to even memorize the names of those characters. I am sure the very impression is discouraging of a reader to pick up this book. But let me tell you, reader, this aspect is least discouraging. Later, during the time of reading the story, I came to know that the author has tried her hard to make the characters as vivid as possible. This clears any hitches to memorize the names of the characters. And the page of Select Cast of Characters just plays as a guide to refer to the relation of the character during some point of reading the book. Though, I never had a need to refer to that part. Author has well-planned the whole story to such an extent!

I don't know whether Mahabharata has any more story than this, but I am content with this much of story. It is exactly as I have been expecting - witty, touching, historical and magical. Every part of Arjuna's life is explained in such a vivid detail as if the author, herself, has witnessed the happenings and came up with this masterpiece.

I don't this holds much significance, but I couldn't help but notice these couple of coincidences.

And yeah, Veda Vyasa is indeed the finest story teller ever!

I would like to thank the author for her signature with a lovely message on the dedication page of the book. 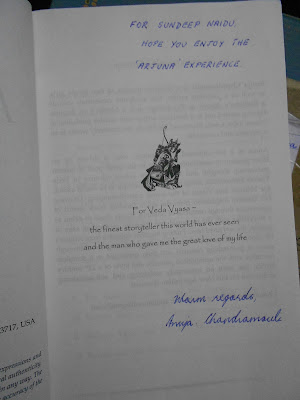 Overall, the novel was very delighting for me. Every little tale was so well narrated that the reader would want to read the book over and over again in days to come. Once I am done with To Be Reviewed, I would love to re-read this book again. Awesome story. Well told. Very interesting.

Recommendations:
To all those epic lovers and ones who never got a chance to hear Mahabharata from their grand-mothers.

Thank you, Anuja, for being my grand-mother...

Reviewed for : Anuja Chandramouli (the author)