Love is Vodka by Amit Shankar 
I have received this book from Nimi Vashi (of http://thereaderscosmos.blogspot.in/) for reviewing. Though she was the one to contact me for reviewing this book, I know that the book is originally dispatched by the publishers. None other than the publishers could send a exclusive bookmark of the other book of the author, named Chapter Eleven.

All the while, I was thinking that the author was a debutante, but to know that he already authored two other books came as a surprise to me.

If love is all about freedom and honest expression then how can one associate it with loyalty?

Being a love child; Moon, the protagonist is anything but a conventional teen. With a leading TV news anchor as her mother, an aspiring entrepreneur as her boy friend, the word LOVE baffles her. The whole idea of having one partner and love being eternal is beyond her comprehension.

Life turns upside down when she falls for the CEO, who happens to be her mother's boyfriend too. Destiny further complicates things by blessing her with a big time modelling assignment and she becomes famous and popular overnight.

A war starts waging between her head & heart on a lot of issues exposing her to various forms of love online & offline.

Will she decipher the true meaning of love? Embark on an exhilarating rendezvous with Moon and discover love like never before.

My take on the book:
Cover design:
The cover design was a good one. Unlike, many disappointing designs these days. It is subtle and darkly coloured, enough to attract quiet some attention. On the contrary, I think the cover is too darkly coloured. Though it attracts some attention, the dark colour might turn some people down. Other than that, the cover design is pretty much acceptable. In fact, the colour is pretty apt for the story. The story, itself, is dark. The behaviour, the character of the protagonist is dark.

Author:
I came to know from the back cover of the book that author is not a debutant. (That is the reason you won't see ‘About the author’ part in this review.) It states that Amit Shankar has already authored two books, apart from this one. Chapter Eleven and Flight of the Hilsa. The bookmark provided with the novel is used to promote the book named, Chapter Eleven. The idea of the bookmark was the most brilliant yet I've come across.

Bookmark:
As you all know I have a special liking for exclusive bookmarks. Though, the bookmark can't be called an exclusive one, but it is indeed used for the promotion of the author's other book - Chapter Eleven. There is a dual message in a blurb. The hidden message is readable only using the red, transparent paper cover provided attached to the bookmark, itself. Check out the visual provided below. 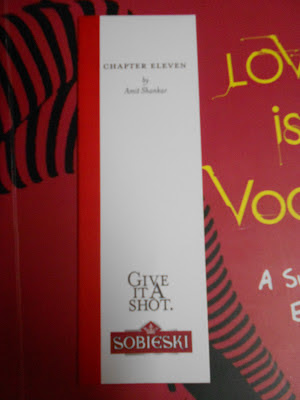 One side of the bookmark. 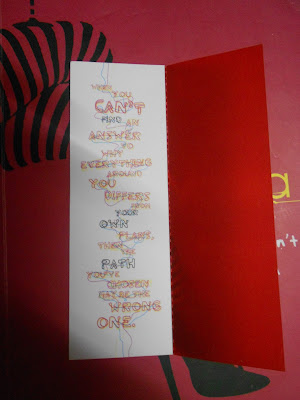 The other side - without the cover of the red paper. 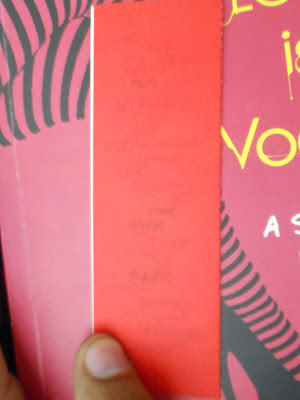 With the cover of the red paper. It reads, Find your own path.

If you yet didn't decipher the mechanism behind the creativity of the bookmark, let me help you here. If you notice the blurb without the cover of the red paper, all words, except four, are printed in red colour. When aided by the red paper, all red coloured words are made invisible and the four words, which are non-red, are left, revealing the hidden message in the blurb.

The foolish, as I was, didn’t notice it until the moment I completed reading this book. All the while I was thinking the red paper had some artistic touch to the bookmark. It is only after I completed reading this book and had nothing else interesting to do during the train journey that I noticed the significance of the bookmark with the brilliantly designed secret blurb.

The story and other aspects:
The story was written in the first-person narration of someone, who addressed themselves, I. Since I had a very bad habit of not reading the description/plot of the book before reading it, I wasn't aware that the story is of a girl. The story is written by a guy, the author, in the perception of a girl, the protagonist of the story. It was least expected by me. It took some time to decipher this truth and understand the story.

For once, I could say that the story is the result of a guy's fantasy of a girl. In many parts, I felt that the protagonist was a girl, who has the character of a boy. Maybe, that’s the idea. Maybe the story is about a girl who had the mind-set of a boy. The line, 'Love is freedom. Loyalty is just another form of slavery', was used more than once. Commonly it is the policy used by guys to use girls to fulfil their material needs. But a girl believing in such a line was really against the routinity. Perhaps, they are what called, 21st century modern girls.

There is one part of the story where the protagonist had some disease called PCOD. Then after, there was not a mention of the disease in the entire story. Maybe it is not such a vital disease to be mentioned again, but it sounded serious to me at least.


Overall, it is a metro read. Not enjoyable by everyone equally.

Recommendations:
I suggest people to go through the plot and take the necessary action. Because not everyone enjoys metro reads. But then, this book isn't entirely a metro read. It also a spread of emotion and true love. That is the reason I, who hates metro reads to the core, enjoyed this read to some extent. My final verdict would be read it at your own call...


This book review is a part of The Readers Cosmos Review Program. To

Publishers: Vitasta Publishers
Posted by Sundeep at 10:55 AM