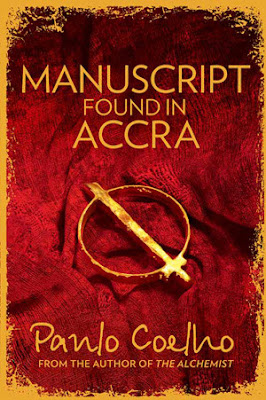 It has been a long time since I have read a book of my choice. Courtesy my regularly fed to-be-read (tbr) list.

I always had a thing for Paulo Coelho's work, ever since I read his The Alchemist. It was my first read from him and it was exactly my type. Those were the days when I started reading. That book really mesmerized me. Well, let me stop it here or else I might slip into writing a review for The Alchemist.

After that, he has released his book Aleph, which I have bought and read and gave up in the middle. The Alchemist and Aleph were two different beings entirely. The fiction, the adventurous touch, they differed in every aspect possible. Most of all, the latter bored me, unlike the former one.

And then came this book, Manuscript Found in Accra. The title of the book, itself, has a mysterious stroke to it. I never would have bought the book if its not for the tempting offers and discounts the online book-selling portals provide you with. However, I bought this book long back and arranged in such a way that, whenever I lifted my head off my laptop screen, the front cover of this book soothed my eyes. I don't think I can come across a more enchanting cover design in the next 100 years!

Anyway, it hardly took a day for me to complete reading this book and write a review on it.

'Only he who gives up is defeated.
Everyone else is victorious.'

After lying undiscovered for over 700 years, a manuscript holding the answers to a city's final questions is unearthed from a cave in Cairo.

Centuries before, on the eve of the invasion of Accra, the citizens gathered. A man stood before them and invited the people share their fears that he might offer hope and comfort.

His extraordinary insights on courage, solitude, loyalty and loss were transcribed and passed on.

A timeless and powerful exploration of personal growth, everyday wisdom and joy.

My view:
Cover design:
Like I have mentioned earlier, I don't think I would come across a better cover design in the next hundred years! The use of extreme shades and the textural picture on the background of the entire cover is just awesome. To top that, the golden letters and details in the design was just out of this world.

Let me try to depict you the awesomeness of the design... 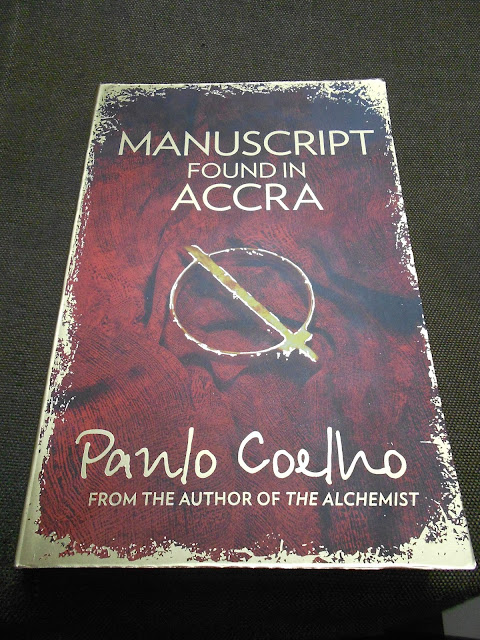 The golden part of the entire cover design glisten when light is bestowed on it. A small heart-attack is triggered inside me, whenever I notice a minute damage to the cover of this book.

I so love the cover design of this book!!

Publishers:
Harper Collins. They are one of the largest publishing houses in the industry. When I say that I don't mean nationwide, but international industry. They have published many highly notable books. Their imprints make a huge list. If you read foreign - non-Indian - authors, you know these publishers. And that's it.

Language:
Well, I don't see that I could give much credit to the author about this aspect. Because I don't know that his words were exactly translated. In the same way, I can't blow the credit to the translator - by name, Margaret Jull Costa - since I don't know whether she had added her creativity to the language. Either way, the language used in the novel is just fabulous. It is simple and gripping. There is almost no, a couple of them at most, difficult words which I don't know the meaning of. It was amazing how use of such simple words could be so gripping. I learnt that it is not the complexity and the complicated use of vocabulary but the narration that counts. Hats off to you, Margaret Jull Costa...

Story and other aspects of the book:
Actually, the book holds no such mysterious story that I most awaited. To be frank, I didn't even go through the other reviews of the book. I only read the description, which gave the impression of a mysterious historical fiction with a state-of-art cover design (damn, why can't I stop mentioning, moreover praising, the cover design!).

The book is indeed should shelved under self-help. It is a series of philosophical explanations for various aspects of life. Almost all the aspects are covered in the book - like loyalty, duty, sexy, love, future and the list extends for quite some length. The scroll, manuscript and everything else is just a way of rendering the philosophy.

Though the book is around 200 pages thick - precisely, 194 - it hardly takes an hour or two to completed reading it. It could be completed in one-go. The size of font was bigger. Eventually the spacing was bigger. Many pages were resigned empty. And what else, the book is not the big book as it seems. But is the typical Paulo Coelho stuff. It has a great deal of philosophy which cannot be handled in such a large amount. Trying to read the book in one-go might be possible. But trying to understand the book in one-go will leave one with a skull-cracking headache. For every few pages, I had to take a break. The lines in there are really heavy and extensively philosophical. There were many instances which I could relate with the incidents in my life. Really serious stuff.

The whole book is the exchange between a person called as the Copt. Accra is under the invasion of the crusaders under a century ago. All the people gather in a group and pray to their respective Gods to overcome the disaster that lay in the following morning. That is when a person, the Copt, appears in front of them offering them 'extraordinary insights on courage, solitude, loyalty and loss'. Every chapter starts with a question from the spectators and the Copt continues to answer their respective questions with a depth only acquired through philosophical insight.

If you have a habit of underlining some awing lines in a book, then you better get a whole box of pencils, because every line in this book is worth under-lining. Each line of the book will leave one in a awe of wonderment.

Final Verdict:
WARNING! This book has some serious stuff! Philosophy at its fullest. If I love it, after all, philosophical books are not just for oldies.

Recommendations:
I would recommend it to every philosophy, self-help book lover out there. And also, to those who are contemplating the idea of trying those genres. And also all those Paulo Coelho fans out there.