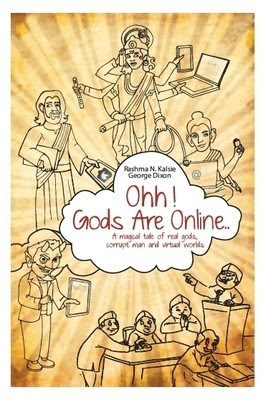 If receiving a author-signed book from the author, himself, is a treat, the book with a exclusive bookmark of the book from the publishers is equally elating.

The reviews of other books sent by Arup Bose, I reviewed:
The Homing Pigeons... by Sid Bahri
The Secret of the Dark by Arka Chakrabarti
When Strangers Meet.. by K. Hari Kumar
Complete / Convenient by Ketan Bhagat

Before I start with my review, I want to show my gratitude for Arup Bose for constantly supplying our tbr (to be read) list with books. Especially, because most of them I found interesting, like this one. Arup, thank you, man, a book from you is always uplifting...

‘Ohh! Gods Are Online..’ is an experimental book wherein the Gods move from the realm of the fantasy to the real world in the quest of solutions to the human dilemmas as they decide the fate of their creation – Mankind.

Christ lives on his own island where the dead souls are welcomed to the afterworld. The other God, Krishna, lives in the harsh real world as a humble pantry boy employed in a hospital – easing the final journey of the people who are dying. Buddy Roy, the Buddha, sends his calming waves to the world from afar. Ati, the God of Atheists, lives on his island with his own set of followers. While Gods go about their tasks they connect on Facebook to ‘chat up’ God things.

The Gods travel between the imagined worlds – Clacton-on-Sea, Jaywick, Frinton-on-Sea, the underwater World of Mermaids and the real world. Human stories of mortals are woven within the fabric of the main story of Gods. Sunderaman is the meanness in man that Gods must confront. Nick, the God of Evil, contrives to use Sunderaman as a pawn to oust the Gods. Somdev, the Godman, wants his share of the Gods’ world. Gods watch over as human characters live out their destinies.

A fast-paced novel, ‘Ohh! Gods Are Online..’, moves between the worlds of men, Gods, and evil forces. Men are transformed to animals and Gods live like men. The characters slide from one life to afterlife and the next life.

Humor, philosophy, fantasy, mythology, and a compelling story are crafted together to write the novel. The novel was neither discussed, nor planned. The chapters were added in a two-year-long to and fro of the script between the authors. The story took many turns and twists as the writers played a game of challenging each other with new characters and plots. The story was neither planned, nor contrived, it was allowed to flow.

About the authors (from the jacket):
Rashma is a writer and playwright. Her recent play, The Lost Dog, was produced with the Australian government's assistance and successfully staged in Melbourne, Australia. The play received international media attention and critical acclaim. Also, she was invited to talk about the play to women's writing organization in Cincinnati, Ohio, US. Rashma has been involved with many NGOs and is the founder of Indian Disapora Dramatics Association, Australia.

George Dixon has been writing short stories for ten years and has published five books on Kindle. George lives with his wife and two dogs in a bungalow in a small village in England.

My take of the book:
Cover design:
If compared to the title, cover design is one of the apt. In fact, 'to some extent', it is also apt for the story. All the lead roles of the story are depicted in the cover picture - Chris, who is Christ; Buddy Roy, who is Buddha; the Old Nick, the God of misfortune, the devil of the story; Krishna, who is Lord Krishna, himself.

Why do I say apt to the story to only some extent? Well, being online and the actual core of the story differ to a major extent. Of course, there was a tiny part of the story, where Gods join Facebook and send few friend requests here and exchange few messages there, and that's about it. The soul of the story rests in higher aspects. In fact, the introduction of Gods going online and all, is just to inject humor to the already philosophical and an enchanting story.

Overall, the cover design is witty and attractive. The animated-look of the cover would be intriguing for many readers. After reading the description of the book, many would carry it on to the cash counter! If I am asked to rate the cover design on the scale of five, I would rate it 4!

Publishers:
Srishti Publishers. Like I have mentioned many times before now, Srishti Publishers have always been a well-worth for me. It is a fact that there were quite a few novels that are letting-down, but the gems - like I too had a love story, the novels of Durjoy Datta, et al - are from this publishers. Not to mention, all the novels lately published by them are worth checking. Most of them were even worth reading over and over again.

I guess this is the first book from Srishti, co-authored by a foreign author. I am not sure, though. 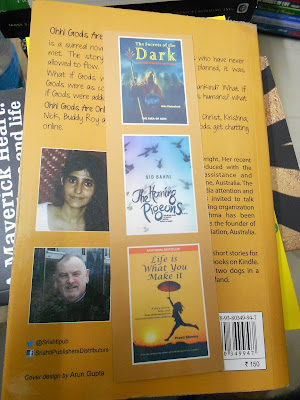 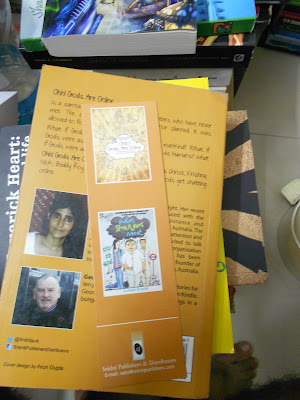 Not to mention, I already have the same bookmark...

Story and other aspects of the story:
When I started reading the book, the very first awkward facet of the book is the name of the author. Well, there is no doubt with Rashma N. Kalsie, but the non-Indian, co-author. On the jacket - on both front and back - his name is printed as George Dixon. But inside the cover, at two places - at the Dedication and Acknowledgements. In Dedications page, there are two dedications made by both the authors. On top, Rashma dedicated her book to her parents for various reasons. And below that was mentioned a dedication by a guy named, Phil Cherry. In Acknowledgements page, there were two mentions of this name. To top it, there is not a mention of a person named, George Dixon. However, I don't think it could be a major deal. Perhaps, its his pseudonym. It is just that I take pride in my findings and use this platform to exhibit them.

Well, I was astonished to know that there is a God for atheists, too! And he is named, Ati...

The language is one of the many pluses of the book. It is just the way I love it. Simple, yet complex. The sentence formations, the conversations, the descriptions, everything is formed using simple English words. The occasional touch of complex words, for which I don't know the meaning, just adds up to the beauty of the book. I would say, the editor has done a great job with the manuscript. Even then, there were few quotation marks either missing or misplaced here and there. I even recollect spotting wrongly spelled 'Krishna'. I don't remember the exact mistake, but it was something like this, 'Kirshna' or maybe, 'Krihsna'...

With every aspect of the book covered, I finally reach the story of the book. Well, there is not much to comment about the story of the book. It is very unusual to come across a story about Gods who walk the Earth and send message through Facebook! Perhaps, that is what called as 'Surrealism'. The two best facets about the book is that the story was, in authors' own words, 'neither contrived nor planned' and the authors never met! I still wonder that how come they came up with such a fascinating story, for not even once meeting in flesh and blood. To top that, the story is equally compelling and intriguing. Of course, there were parts of the book which were doze-boring, but overall, the story is well-above average. The very idea of the story is intriguing enough to encourage readers to keep going on with the reading...

There is one aspect of the whole story that I still wonder about. More than once, there was a mention in the story of Jesus eating fish. My insight into the voiding depths of Christianity is very meager, a clarification from one of the readers whether Jesus really ate fish or otherwise, would be courteous!

Final Verdict:
It is a aberrant and interesting story that is worth a read. Though, there is a hint of philosophical insight into the book, for some readers, it might sound absurd and far from reality. This is anything but serious stuff. It has got everything a good book must contain.

Recommendations:
To all those readers who welcome surrealism. Worth a read for everyone...

Reviewed for: Arup Bose (The publisher)