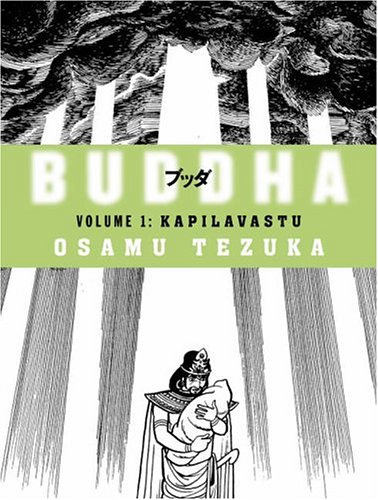 Osamu Tezuka, the godfather of Japanese graphic art, brings ancient India to life, lavishly retelling the life and times of "the enlightened one" in his critically acclaimed eight book masterpiece, Buddha. The fates of real and imagined characters are deftly interwoven as they engage in fresh and unexpected adventures, playing out Tezuka's philosophical concern with overcoming fate and the uselessness of violence.

In the first book, Kapilavastu, Chapra, an ambitious slave, spurns the caste system into which he was born and tries to become a nobleman. Tatta, the wild pariah child, communes with animals. And the monk, Naradatta, strives to uncover the meaning of strange portents surrounding the Buddha's birth.


My take on the book:
The best thing about this series is when you own all eight of them, which on stashing cover to cover the spines will form a wonderful piece of art - Three depictions of Buddha at different spans of time. A kid, a youngster and a mature Buddha forms.

I was in my class when I started reading this book. Fifteen past, I was shocked out of my wits with my progress. I had completed 95 pages! Mind you, I was just glancing through the pages, or just reading the dialogues (there were no narratives). I read each dialogue with precision and also appraised each art scene to admire the sheer effort put in by the author. Still it was 95 pages for 15-minutes!

The story starts with a folklore and it continues so. I don't know whether it is a spoiler or something, but frankly this book doesn't have much of Buddha's story. All his role in this book is to take birth and it goes on to say various other background stories, which - I assure you - have their respective relevance in the following volumes.

It being a Graphic Novel, I feel it is important to discuss about the illustrations used. The illustrations were black and white; probably, could be charcoal art or something. My friend told it is pen art. There were no details in the illustrations. However, it doesn't count to much given the length of the books, though. The characters were more Manga-like. In fact, there were few scenes in the story when the illustrations get really Manga-like and there was an addition of humourous tinge to it.

Though it is not so important, I would like to appreciate the author for the choice of font used for the story. Any other time, I wouldn't have pointed this out, but after reading V for Vendetta, after facing so much struggle to read those dialogues with a font style that joined r & i to form n - and so on - I realised that even the font style that is used to deliver the story is damn too important.

There is another aspect of this book that needs a mentioning here. There were some artworks which spanned through the entire two sides of booklet, which received the peak of my admiration. It commands respect from the reader for the fine artist that the author is.

Finally after the end of the book, I had a keen craving to read the sequel (which fortunately I do have - and the review is soon to follow), so I better suggest the readers who plan to read this book to buy the entire series. Of course, you wouldn't dislike it, I assure you...