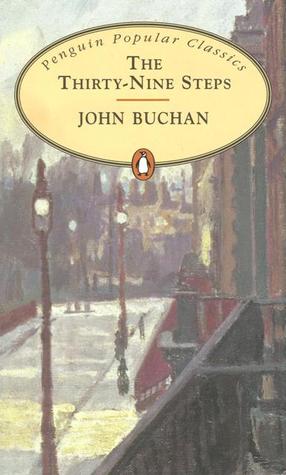 'My guest was lying sprawled on his back. There was a knife through his heart which skewered him to the floor.'

From that moment Richard Hannay's own life is under threat. A few days before, the dead man had told him of a political assassination that was shortly to take place in London and which would have terrible repercussions around the world. In mortal danger he sought refuge in Hannay's flat. Now he had been murdered and Hannay had to move quickly if he was not to suffer the same fate.

Pursued by both police and killers he heads for Scotland. There, among the Scottish moors, a deadly game of cat and mouse ensues, and Hannay needs all his resourcefulness and courage to stay one step ahead. His only hope is to persuade someone in the British Government of the impending danger. But will he be able to get to them in time and save the country from certain ruin?

The Thirty-Nine Steps is the most famous of the five novels featuring Richard hannay and established John Buchan as one of Britain's finest writers of suspense stories.


My take on the book:
I didn't know that this book is the first in the series of thrillers based on the character Richard Hannay. If I knew it beforehand, maybe I wouldn't have dared to start reading the book. So is my fear of starting to read a series. However, this being a independent series there won't be much in common between the books, I hope. Also I am thankful that this is the first book in the series.

I love this book for it's anatomy. Firstly, the font. The typeface used by all the book in the edition series Penguin Popular Classics is kinda old-school. Almost like just out of a typewriter. That provides the actual feel of reading a classic and does great deal helping the reader to go on, in spite of the monotonous parts. Secondly, the size. The book is hardly a few pages above 100! What can be more fascination: classic and 100-pages thick!

I always find it difficult to coup up with classics. All aspects of them; the language, the narrative style, the pace; everything poses a threat to my intellectuality. Especially so when the novel refers to a historic event that is infamous, but had taken place, just like in this book. That leaves me with a feeling that I am lacking something that is needed to read this book. The feeling of not being eligible to read this book.

The story was pretty exciting. Hannay is a adventurer. He had just returned from his adventurer and is rendered listless. Having experienced so much adranaline for so many days, he gets bored from his monotonous life, until life decides to throw another adventure at him. So goes the story.

Pretty exciting, like I said earlier. But pretty lagging at some parts that really gave me a hard time. That is the reason it took me so long to complete so small a book.

Never judge a book by its cover, they said.

Never judge a book by its size, they never said.

Overall, it was pretty disappointing read. Not up to all my expectation. Because the story was good, but didn't actual fulfill the purpose of a thriller, the core being uninteresting.