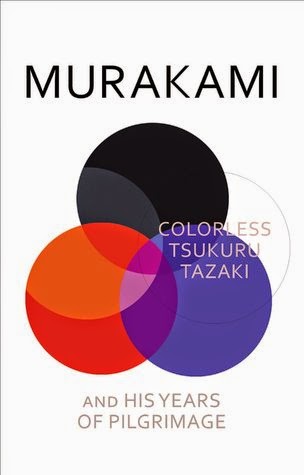 Tsukuru Tazaki had four best friends at school. By chance all of their names contained a colour. The two boys were called Akamatsu, meaning ‘red pine', and Oumi, ‘blue sea', while the girls' names were Shirane, ‘white root', and Kurono, ‘black field'. Tazaki was the only last name with no colour in it.

One day Tsukuru Tazaki’s friends announced that they didn’t want to see him, or talk to him, ever again.

Since that day Tsukuru has been floating through life, unable to form intimate connections with anyone. But then he meets Sara, who tells him that the time has come to find out what happened all those years ago.


My take on the book:
This is one of those books which I buy a long way back, but save it unread out of fear of missing the pleasure of reading it for the first time.

Finally when I complete reading the book, it is not very easy to judge the book and put front a rigid opinion about it.

I would like to start the review by saying, this book is not Murakami's best. That's for sure. The book makes up an interesting one going by its physical features - like the rubbery hard-cover and the stickers included inside the book.

Each sticker correspond to at least each scene, a part where the item is described - nothing special about it - but all I wonder is what the Chinese charactered-stickers in the bunch mean. I stuck them to the inside of the cover guessing them to be the name of the book and the author and the translator. Though the concept of stickers' involvement in the books is not new, it surely helps keep you intrigued. The little game of relating the stickers to the correct scene is very refreshing.

Overall, the book is good. There are no evident drawbacks with the book. And even if there are, they won't make much of a difference.

As much as the book is good, it is pretty boring. It is missing the typical Murakami essence. Magical Reaslism - the very reason I read Murakami - has a very little part in the book. Most of the book is all seemed very puny. The psychological effects of something so very small in the past in the future seemed an absurd idea. Well, I always believed we are a generation of exaggerators. Hence, the idea might seem very great and emotional. But frankly, I feel it to be pointless, the whole journey. But then since when does Murakami started to make a point? It is the story, the narration and the feel of both of it that keeps the reader hooked.

Well, though there was nothing remarkable about the book, which in short seemed like a forced output from the author, it keeps one intrigued using some unnameable force, which is very Murakami thing.

I would recommend to read it only if you already read Murakami and are a fan of his work. Others, it is better to stay away from it...


Title: Colorless Tsukuru Tazaki and His Years of Pilgrimage