The Curse of Brahma by Jagmohan Bhanver (Krishna Trilogy #1) 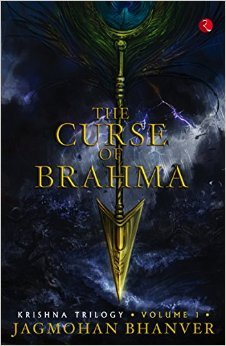 The man who became a brahmarishi.
The curse that banished him to the hell of hells.
And the revenge that threatens to destroy the three worlds.

When Lord Brahma, the God of Creation, banishes his star pupil from Swaeglok in a fit of rage, he does not foresee that his decision will alter the fate of the three worlds. Mortally wounded, and anguished at Brahma's unfair punishment, his pupil struggles to survive in Tamastamah Prabha, the hell of hells. In time, he becomes the Dark Lord, the most feared figure in Pataal Lok, who swears to destiny Brahma.

The power of the Dark Lord soon begins makes its presence felt in the mortal world. Vasudev, the brave prince of Bateshwar, becomes the hunter of Asura assassins; his closest friend, Kansaa, almost dies while trying to save his sister from a group of deadly monsters; and the most valiant kings in Mrityulok turn over to the dark side, driven by forces beyond their control.

Only one person threatens the Dark Lord's well-laid plans - Devki, the beautiful princess of madhuvan, who is destined to give birth to the warrior Krishna.

Will the Dark Lord allow Krishna - the person who has been prophesised to destriy him - to be born?

My take on the book:
As always, I went by the name and other such content on the front-cover when I decided to read this book. I perceived it as some Mythical Fantasy with Gods cursing, fighting and stuff. The dramatic prologue just added to my misconception.

Basically, blurb simply put, it is the story up to Krishna's birth. The story that led to it. The backstory of why Kansa, who dearly loved his sister Devki, underwent such a drastic change. What tricked him to think that way ... and various such stuff.

It was informative, yes. I never knew there was such story behind Krishna's birth which backtracked to a very long time ago, almost 200-years before the birth,started by a curse given by Brahma. All stories I ever read or listened starting from Kansa hating Devki for his death was prophesised in the hands of her eighth born.

The narration seriously needed some spicing up. Or maybe some cut-shorting. It needs to be trimmed to remove various unnecessary parts. This book could do with a good editor.

It is a failed attempt writing such a short story with such vividness, dragging it to be almost 400-pages thick.

The language used was good. Reader-friendly. But then it could do little to encourage the reader to keep going when the narration is so lagging.

Took a lifetime for me to complete and, at the end, I am left as frustrated as ever...

Title: The Curse of Brahma