A Fistful of Earth and other stories by Siddhartha Gigoo 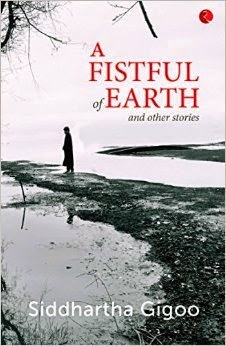 
Set in a land ravaged by political upheaval and war, A Fistful of Earth and Other Stories depicts a surreal world where people find themselves trapped in circumstances over which they have no control.

In a series of bizarre incidents, a researcher is baffled by the secrets he unearths about a dying clan; a monk encounters an enigmatic stranger at a railway station; a municipal commissioner suddenly goes mad for no discernible reason; a medical intern discovers a shocking secret after a patient’s death; two chess-loving inmates are unable to escape from a prison long after it has ceased to be one; and a refugee undertakes an odyssey through time and memory in search of his lost friend.

Written in elegant and lyrical prose, and traversing a range of themes, these stories will transport you to a world of conflict and persecution, of banishment and exile, of loneliness and despair, but where still glimmers a hope for redemption.


My take on the book:
Not something I was expecting. I had received to review this book on request. A short story collection was what I needed during these busy days. I thought perhaps each story for each sitting might get the job done. And the other reason being, the blurb is elegant in a complicated way. There is no certainty of the genre of stories - not that I was expecting something. They seem to be at their absurdity best.

There are total 16 stories in all. Each beating the other for the best.

I try hard to judge the stories and put front my opinion but they are too perfect to be judged. They are so beautifully narrated that it leaves a longing once you complete reading the book.

While I was reading it filled me with delight like the cozy feeling you get when wrapped in a thick, blanket in intense chill.

Names are rarely used in the stories. A couple of character might've been named, but the places are not referred to at all. There was one being named: a place named Naqbal - which I thought doesn't exist in real world but - is a village in J&K. Yet, with such a restriction, it is magnificent to see author advance with his narration so flawlessly.

The narration is very poetic. Of course, the language gets a bit tricky, with poetic narration, but it was not bad. If you are in the flow, you wouldn't drown.

A must for people looking something out of normal. A very interesting read!

Title: A Fistful of Earth and other stories