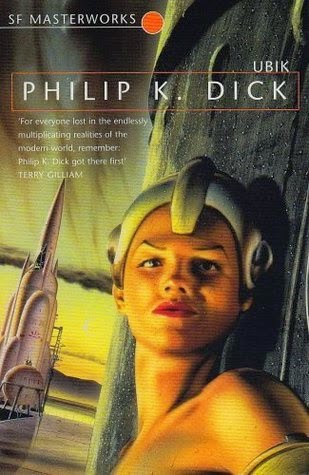 Glen Runciter runs a lucrative business—deploying his teams of anti-psychics to corporate clients who want privacy and security from psychic spies. But when he and his top team are ambushed by a rival, he is gravely injured and placed in “half-life,” a dreamlike state of suspended animation. Soon, though, the surviving members of the team begin experiencing some strange phenomena, such as Runciter’s face appearing on coins and the world seeming to move backward in time. As consumables deteriorate and technology gets ever more primitive, the group needs to find out what is causing the shifts and what a mysterious product called Ubik has to do with it all.

My take on the book:
Phillip K. Dick is one such author I always dreamed of reading, but never thought myself to be ready for his work. His critics suggest he is a humongous figure in sci-fi literature. I was always fascinated by his book, Do Androids Dream of Electric Sheep. Not that I had actually read it, but it is my general weakness for Dystopian books, and that is considered the best of Dystopia. It is one famous book which I always wanted to read, but don't own. However, I came across Ubik at my friend's and immediately borrowed to read it.

I always wondered about one thing dealing with sci-fi books. Sci-fi stories generally have a typically advanced setting. Very little conventionality is maintained. How do the sci-fi authors introduce the readers to this world of absurdity and complexity? Basically, there are two ways, of course. One, the conventional way. You compare both the present - real - society and its ways to the futuristic - fictional - society. That is plain and simple. The other way is very tricky. You don't introduce it to the author. You go on. You narrate the story. You let the author take in the environment of the story. You let the characters play their role. And eventually - and undoubtedly - your reader is in terms with ways the society works. That's the way Dick has opted to in this novel. So, basically, like you might have guessed, I was pretty stranded at the beginning of the story. I was struggling to keep up. I found no encouragement to go on. I contemplated giving it up a couple of times, but thought against it just for the sheer magnitude of Dick's popularity.

And I am thankful I didn't give it up. A 30 or so pages down, everything dawns on you. You are with the flow.  You understand everything that was happening till then. You would be thankful the author had opted to the hard way than the other conventional way of introducing the futuristic society.

The story goes on. You realise what Ubik in the story means, why it is so important so as to be the title of the story. Then comes the ending.

It is one of the best mindfuck ending. To give an idea of what mindfuck could possibly mean, let me mention a few movies which gave me similar feelings. The shutter island, Inception, Interstellar, American Psycho. And you get the drift. If you like this book and haven't watch any of those movies - which I don't think is likely - you must watch them.

However, my friend likes the book and had perceived a different ending. It entirely differed from what I perceived from it, which - I am sure - is way too different than what the author had intended to portray. Probably, that's what makes the book so likeable. And perhaps, author was aiming for that very feeling to the ending.

A must read for Sci-Fi fans and TO EVERYONE ELSE!!!