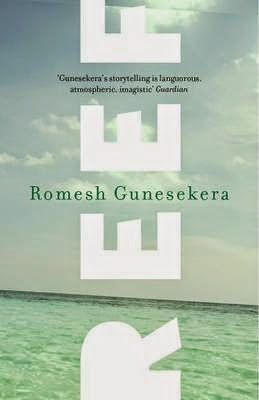 
At the age of eleven, Triton goes to work as a houseboy to Mister Salgado, a marine biologist obsessed with the island's disappearing reef. It was the biggest house he had ever seen. People from all over the world came here to sell their wares, to talk, to live, for this was where life took place. Even the sun would rise from the garage and sleep behind the del tree at night. But beyond Mister Salgado's house and their Sri Lankan village, there is a world falling apart and it is in this world that Triton must become a man. An absolute classic, Reef is a luminous coming of age novel.


My take on the book:
I don't usually read coming-of-age books. I have perception that they are usually boring. I don't quite collect where I picked up this conception (or misconception), it was just there as long as I could remember. I came to read this book on my friend's suggestion and also because I haven't read any books by Lankan authors.

I am done reading the book and yet there is this feeling of leaving a story midway. Basically, the story hadn't got a point. A storyline. A plot, you can call it. It just goes aimlessly. Various unrelated incidents takes place and among all this the revolution or the rise of Tamil Militant group or something similar, of which you must be aware of before reading the book. Frankly, I have no idea of Lankan history or its politics. That could be one reason that novel didn't strike a chord with me.

There was very few dialogues. And the few talked of things I didn't understand at all. Lankan politics. Coral reefs. Erosion of sea. Some made few impressions but nothing interesting. Another drawback, why I didn't quite connect with the book.

It left the story midway, at the end. Salgado takes off to Lanka and that's it. What happens next, there is nothing mentioned. Also there is epilogue, which is probably the after-chapter of the end of story. But then, that doesn't quite reveal much either. Like the end, it stops midway, too. I have quite a few conclusions to the story, but who am I to conclude someone else's story, anyway? It is very irritating when a tale is partial. We read stories so that they can end. Happy or sad, they must end. At least, for me. That is my taste.

The one extraordinary aspect of the book is the narration. The description of the scene. The comparison. The metaphors. It was very lyrically defined that I had this doubt from the very beginning that how can a houseboy be so poetic about things, but to learn the answer to that, you need to get through to the last.

Maybe I would have rated the book better if it had had an end. But for now, this is it...