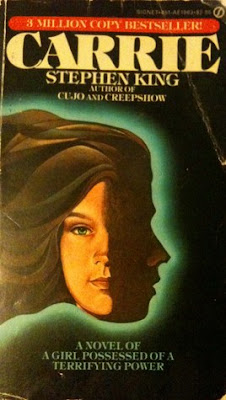 
A modern classic, Carrie introduced a distinctive new voice in American fiction -- Stephen King. The story of misunderstood high school girl Carrie White, her extraordinary telekinetic powers, and her violent rampage of revenge, remains one of the most barrier-breaking and shocking novels of all time.

Make a date with terror and live the nightmare that is...Carrie.


My take on the book:
This book had been lying around in my shelf for a very long time. I admired Stephen King a lot as an author. Its weird, I continue to do so without reading any of his work. Of course, save for his non-fiction, On Writing. He had almost the blurbs of his novel in there, so  I pretty much know what Carrie is about, and also how the author got the idea. On Writing discusses it all. Finally, after so long, I thought 'what shit' and started read it. When brought out the book I noticed it was all frayed and dog-eared and its spine was deeply creased and it showed all signs of hard-time. Not to mention, that creamy smell of vanilla, uniquely emitted by those age old books. It was damn inviting and it was what I exactly wanted. I hadn't read a classic - if I call it that - for a long!

I believed it was an horror story, but, due course, I realised it was a sci-fi. Here there was thin line that separated both the genres in respect of this book. If Carries ability to fiddle with objects was termed paranormal, it would have given the story a touch of Horror, but it was clearly stated - I assure you, this is no spoiler - that it is TK, Telekinesis. That dragged the book into the sci-fi genre for me. It is paranormal, no matter what.

It is the first I've ever seen someone narrate a story so innovatively. The story was mostly third-person, but not entirely. There were snippets from a book written on Carrie White - the character in the story. Fragments from Sue Snell's - another character in the story - autobiography; testimonies; tickers; first-person account from various character; it got all of it. King was a struggling writer and a teacher at the point of published this novel. Though, this is his first published novel, it wouldn't have been the first he wrote. He must have worked on various others before this, but the talent he portrayed in this novel is no less a miracle, even for an old-timer.

There is this small piece from the back of my edition. It goes,

A YOUNG GIRL
GREW ANGRIER AND ANGRIER -
AND A TOWN WRITHED
IN PAIN...

That pretty much breaks down the story for you.

I believe this is the smallest book King had ever wrote and will ever write and I suggest you start the reading spree of his books from this one. A brilliant piece of work...