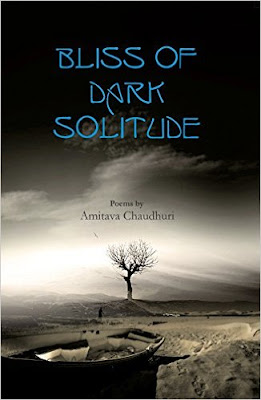 We are afraid of the dark. We are also afraid of solitude.

However, a potent combination of these two conditions can indeed be a blissful - for it gives us the opportunity to discover the most alien thing we have within us - our own heart. As we delve deep within ourselves, we find surges of emotions, sometimes dark, sometimes euphoric.

And what better medium we have other than poetry to bring out such emotions, Bliss of Dark Solitude is a collection of such emotions - joyous, hearthbreaking, rebellious, remorseful. Let us explore the dark - alone, unaided. Let us savour the bliss it brings.

My take on the book:
After a long time of not accepting books for reviewing, comes along this author who wants his book of poems to be reviewed. And the blurb was equally convincing. So I went ahead and accepted this book for review.

The moment I read the blurb of the poems I knew this was not something very normal. The author has potential of great deal. His thought were utterly poetic and deep.

After reading the book, I felt I was only half-satisfied with the book. It is not that the book was mediocre or something, but only half the poems intrigued me. Only half of the poems really clicked and made me ponder over the world.

Done saying that, I must agree those poems worked more good than the poems did the other way. They were inquisitive. They were curious. They were mystical. They were deep. They makes you think. They make you question and take a step towards the better self.

I think that is a tremendous achievement to being about change in people using just one's thoughts. Yeah, these poems were more like the author's thought. And such strong thoughts.

And there were these love related poems. They were romantic. Or, at least, supposed to be, which sounded cheesy to me. Well, then it could be my bad too. Having read too much Bukowski makes one immune to scented love. However, that was the only part that I hated.

Overall, the book was pretty strong stuff. Might as well start reading more of poems some time...