Aryavir (Guardians of the Blue Lotus, 1) by Anita Shirodkar 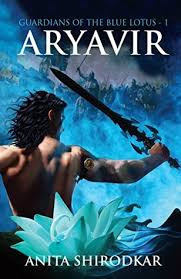 Aryavir is not an ordinary prince. Heir to the throne of Kamalkund, Aryavir is a Kamal Akshi - blue-eyed and blessed by the Indivara, a divine Blue Lotus that protects his kingdom. And yet Aryavir harbours a terrible secret about his fate. His family, led by his father, King Chiraksh, is bound by its own web of intrigue and ancient promises.

The complexity of the family's past and present allegiances and the secrets each family member hides are set against the fact that Kamalkund has to fight off covetuous kings from across the borders who will do anything to control the powers of the Lotus.

Meanwhile, as Aryavir, his faithful tiger Kar and friend Sitanshu fight their own battles, the kingdom is faced by clear and present danger. And the past unravels its mysteries unexpectedly.

This classic tale pays homage to India's magnificent mythological heritage and, at its heart, is a story about the eternal human journey.

My take on the book:
I have always been a little skeptical about Indian Fantasy books. There could be a few good ones, but what I've come across were mostly a bad experience. Most of which, I've given up half way. Yeah, so bad!

After reading Aryavir's description, I could guess it is one of those good ones. Though the plot promised to be complex and intriguing, the simplicity of the blurb promised a breeze of a read.

The story started off on a pacy note as there was so many characters, parallel plot-lines, existing. The author had skillfully built and narrated the story in such a way that each character made an impression that lasted long after the book. One reason, I mostly evaded series are because of so many characters. Sometimes, it really gets hard to catch up with them. But in this book, author made sure that nothing of that sorts happens. There were times I had forgotten names of the characters in the book, but their story lines and characteristics were too intriguing to confuse.

Another aspect I loved about the book is that in the start of the book there is a rough map (which, of course, resembles India) stating the whereabouts of the kingdoms of the story. There is also a map of lineage of the key characters in the story, which will come very handy in the later part of the book.

The author has this unique way of story-telling which will have a grip over the reader. The plot line is so pacy, it is hard to divert one's attention.

Overall, Aryavir is on the best Indian books I've read in the recent times. Gripping, fast-paced and with edge-of-the-seat twists, I would recommend this book to everyone.

The review of the second book in the Guardians of the Blue Lotus series 'Sitanshu' is soon to come. Stay tuned...

Series: Guardians of the Blue Lotus, #1