Sitanshu (Guardians of the Blue Lotus, #2) by Anita Shirodkar 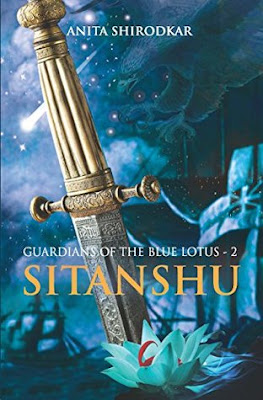 Blurb (from the book):

As the divine Blue Lotus Indivara sprouts an ominous red petal, its guardians must do everything in their power to protect it and their kingdom. Aryavir and Sitanshu march to the border of Kalipura for a bloody showdown with the Chandraketu King Divyendu. It seems as if the Kamal Akshi Army with its peerless long-haired Kesakuta warriors cannot lose a war, but the wily enemies of Kamalkund have diabolical plans that are not written in any rule book. Thanks to the evil machinations of the Mayakari Queen Tamasi and wily King Kratu, Aryavir and Sitanshu are facing the battle of their lives.

With hidden ancient secrets that are known only to the revered Maheshwari Masters, the mythological Old World is about to be plunged into intrigue and danger its denizens could never have imagined. Powerful kings face mortality, relationships are tested to their breaking point and the Great War of Sompur will bring completely unexpected repercussions.

Written with the classic Indian ethos, Sitanshu, the second part of the Guardians of the Blue Lotus Trilogy, pays homage to India's magnificent mythological heritage and takes the reader on a journey into the heart of human passions.

My take on the book:
I feel really fortunate to have read the first book, Aryavir, when the second was already out. Lot of stuff happened at the end of the first book. Lot of good things happened. And then, there are few stories in the saga that ended on a very high note, which will leave the reader puzzled and eager for following part. I'm sure, I couldn't have taken the wait.

The very first chapter of the second book deals with the edge-of-the-seat scene that the first book ends on. Though, it was little predictable, this part of the story, the following events makes the story more interesting.

The second part of the saga mostly deals with the internal turmoil of the rival kingdoms involved and the war that ends the rival, one way or the other.

It is really surprising how the author has maintained that unwavering pace since the start of the first book. Not once, since the start, have I felt that the story slacked. The description of each scene is so vivid and realistic, the reader will be engrossed for sure.

Haven chose the third-person narration, author have wonderfully orchestrated the parts of the story like a smooth, soulful symphony. Since its a saga not constricted to one story, there are many parallel plots going on and the talent of the author at not once misplacing the facts of the story instils pure interest.

There are so many folklores and myths about the kingdoms mentioned in this book, the author has built a world of her own.

By the end of the book, everything about the story will lead to the ultimate danger faced by them and you will be left wanting more. I eagerly wait for the third installment of the series,

Overall, the second book keeps up the expectation and carries the reader with the same zeal to the rest of the story. If you haven't read the first book yet, you must go do it.

To read the detailed review of the first book in the series, Aryavir, click here...

Series: Guardians of the Blue Lotus, #2