Probably, my fourth GoodReads give-away win. Otherwise, I doubt I would've ever come across this book. In fact, if I were to choose between this book and any other book, I would definitely choose the other one. I still wonder why I registered for the give-away of this book.  Perhaps, because it is by Indian author and I love reading Indian novels. Now regret even writing this review for this book.

Named after their critically acclaimed film 3 on a bed, India's first Polyamoric film produced by Satyajit Ray Film & Television Institute, Kolkata; the authors penned down three novellas of different taste in the backdrop of contemporary India and its changing urban lifestyle.

India 24 portrays the lives of individuals from different parts of India with different social strata, cross-connecting each one's lives, to provide an insight into the greater politics of life and living in contemporary India.

1 Day for Love explores a young woman's obsessive fear of the festival of Holi (The festival of colours) against the evolution of gender and class politics, culminating into an all-encompassing indifference infecting the fabric of the Indian society.


About the authors:
Rajdeep Paul (born September 1981, Kolkata, West Bengal) is a boy who refuses to grow up like his favourite hero Peter Pan. He lost his mother at age of 9 and had a very protective childhood. He studied Computer Science and Engineering to fulfill his father's wishes. He worked in Infosys Technologies Ltd for three years as a Software Engineer and during that tenure had the opportunity of travelling to and staying at different parts of the country and interacting with a vast variety of urban Indian youth working in the IT sector. He was not a serious worker in the company but still scored well with his bosses for being the poster-boy in the officer's extracurricular activities. 'India 24' was written by him while he was in Infosys, inspired by events that took place around him. In 2007, he quit his job to follow his dream of film making and joined Satyajit Ray Film and Television Institute, Kolkata to pursue a course in Film Direction where he made the 32 minute short film '3 on a bed' along with Sarmistha Maiti. The '3 on a bed' novella is a progression to the short film, while the film's story had a wide canvas, the novella concentrates on the acute inner lives of the same three characters. Rajdeep now lives in Kolkata and works as an Independent filmmaker and Writer. He is presently writing a series of Epic Fantasy Novels to be published in 2013.

Sarmistha Maiti (born December 1979, Haldia, West Bengal) had dreamt of becoming a writer since her childhood, which she spent in different industrial townships across the country travelling with her parents. Her father, an Engineer in a Public Sector Company, wanted his daughter to also be an Engineer. But encouraged by her husband to twelve years, a celebrated artiste, she went against her father and took up first graduation and then post graduation in Comparative Literature from Jadavpur University, Kolkata. She started her writing career as a Journalist in Hindustan Times, Kolkata in 2000 followed by the Times of India, Kolkata and then as a Copywriter in an Ad Agency. Her first book, a collection of Modern English Poems titled Forbidden was published in 2004. She in presently the Managing Editor of www.mattersofart.net (India's 1st e-zine in Art) and has been also contributing as an Art Clinic to different Art Magazines across the country since 2007. In 2007, she also took up a Course in Film-making from Satyajit Ray Film and Television Institute as an editor, where she met Rajdeep; their diverse backgrounds initially providing a backdrop for great conflict and later for great collaboration. Sarmistha now lives in Kolkata and works as an Independent Filmmaker, Writer, Art Critic and Curator and the conflict between her industrial background and creative pursuits reflect greatly in her works. 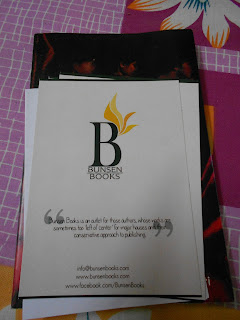 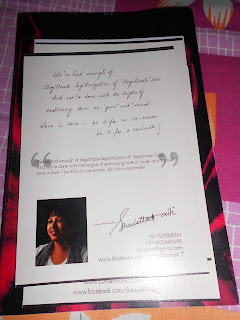 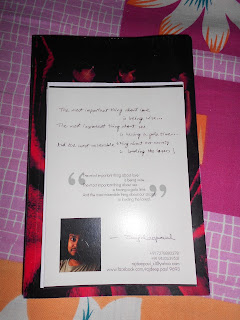 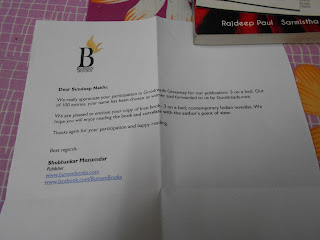 Bunsen books. Never heard of this publishers. Probably, new to the industry. Probably, ready to publish any book under the sun. But, believe me, the design of the bookmarks, the paper quality (the book itself weighed good), the logo of the publishers was very impressive. It gave the impression of a classic publishers who release only rare, creative and best of the best books. Also the first bookmarks says,

Busen Books is an outlet for those authors, whose works are sometimes too 'left of center' for major houses and their conservative approach to publishing.

I was very impressed by their very motive. Aspiring to be an author, myself, I made a note to send a copy of my book to these publishers when I am done with the manuscript. But now, after reading the book, I think better of it. Now I think conservative approach is better than this crap of a book, I'm writing review for.

Rajdeep Paul and Sarmistha Maiti, both, are students o Satyajit Ray Film and Television Institute. I have heard too many praises for the works of Satyajit Ray. Didn't get to see any of his works, though. I also heard the all his works are different, thought-provoking and very controversial. He was one free-soul struggling in the conservative shackles on Indian tradition. I think, but these stories are way too disturbing.

It consisted of 3 novellas,

The story starts at a random scene at a call center. There are two characters named in this part. In the next part some other random scene from some other setting is derived and some more characters are named. The whole story is about the random events, incident and cliches from the ordinary lives which is happening at the time named in the start of the part. However, I THINK, at the end of the story, there is a link placed between all these stories. I THINK because I couldn't must understand the story for the following reason,

3 On A Bed
The second novella in the book. The prime story on which the name of the book is derived. It is written by both the authors, Rajdeep Paul and Sarmistha Maiti.

It is the story of three people - two men and a women - who are deeply in 'love' (I call 'shit', in this case) with each other. Everyday they sleep on the same bed, with men on either side of the women, stark naked. The very thought disgusted me. I THINK India hasn't got into such decreased values. Yeah, I have heard of Beat Generation and all, but this was too much to imagine. The women loving two guys and the two guys are okay with it. How is it even possible? It is impossible as for my imagination and reality of the contemporary situation is considered.

Maybe the story had a deep blend in it. Maybe it is for deep thinkers who think unlike me. But the book is given to me and this is my review, to put forward my view. I call this book disgusted by this very story. Even the cover image of the book portrays three people sleeping together.

Please, spare me these kind of crap!!

1 Day For Love
It is the third and the final novella in this torturous potpourri. It is written by Sarmistha Maiti and is the biggest of all the three stories. It spread almost the half of the book!

Frankly, I couldn't even get myself to complete this story. From the bits and pieces, I have read I came to know that the lead character, a female, whose name I don't even remember, had a strange disgust for the festival Holi for reasons I don't know (I don't even know whether they have mentioned it in the story). She turns green at the very thought of colours.

Somewhere in the middle of the story, I learnt that she is married, but loves someone else in a 'mysterious way'. It is not the usual form of love but sacred, it was told. I never knew there were forms of love. I hate this story!

First of all, I think the authors or the publishers should concern an professional editor before getting the book printed.

Secondly, please, try new things, but not the ones which are disgusting like these. Please be more expressive. I hate to say this but the language was a torture. Please make an effort to improve it. After all, it is the medium through which you communicate with your readers.

And, also, yeah, stop using phrases like, "I love you, but it is the pure kind of love, not the other one." "Yeah, even my mother says that there is a divine intervention for us to meet." The phrases can't exactly be the same, but there are umpteen alike sentences in the book.

Recommendation:
I even don't know why I am writing this part of the review. After reading the review, I am certain not a soul will venture to buy this book and, in case they did, I salute you, comrade.

Hell, no recommendations to anyone!! I so hate this book!!