The Secret of the Dark by Arka Chakrabarti 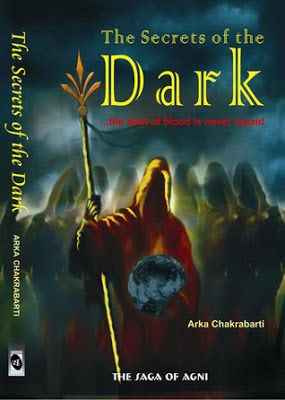 Review:
Srishti Publishers have themselves mailed me the copy of this book for reviewing. This is the second consecutive book, I've received for reviewing from this publishers, after The Homing Pigeons.

If you have read my review of The Homing Pigeons, you would have understood in how awe the book had kept me. And this book is no less. In fact, this book is better than the other one. (I don't understand why I keep comparing both the books. Probably, because it was after some time, I have got something substantial to read which caught my interest from start to the end, till the very the page.)

Plot (On the jacket):

Is one born with his destiny or does he forge it?

In the mystical land of Gaya, two prophecies bind the fate of men and empires alike. The Destroyer born from the royal seed on the Land of the Setting Sun shall bring the empires down, or so has been foretold.

In between the Destroyer and the world stand the Seven Guardians of Gaya, guarding the realm of man. A king, a father, defies the Seven and fate itself to save the last drop of his blood and prince Agni grows in the Land of the Rising Sun, exiled from his own people, unaware of his past.

Losing the woman he loved most to the shadows in the dark, Agni is thrown into a whirlpool of events that he neither knows, nor understands. His quest for vengeance brings him to the doorstep of a secret that will shatter the very foundation of beliefs of a world.

Can Agni avert his destiny? Can he uncover the truth about the Seven and the prophecies, now hidden behind a veil of ignorance?

The secrets of the dark are sometimes so terrible that they are better left unsaid.

About the author (On the jacket):
Arka Chakrabarti is a twenty-five year old youngster from Kolkata whose small quest to chalk out the perfect words for the perfect moments drove him to take up content writing not only as a passion but also a profession. A commerce graduate from Heramba Chandra College, he is passionate about reading fantasy novels, ever since he was a child. With this book, he has taken his first step into the world of diction and intrigue, chalking out an unimaginable world of secrets and mysteries.

Genre:
Fantasy. Frankly, I am very new to this genre of stories. I haven't read many of them, save for the Shiva Trilogy, the story of which I don't actually remember. So there aren't better books to compare this book with. I will try to explain what I felt and how the book is in detail.

Cover design:
I think a little more effort on the design of the cover might have attracted the attention of the readers what the book reserved. Even the tagline - ... the debt of blood is never repaid - on the cover page was blunt and normal. Red text on a dark background wasn't much appealing.

Not to mention, The Homing Pigeons had a very good, or rather pleasant, cover design.

Publishers:
I haven't been a big fan of Srishti Publishers. They have published many boring novels before. But I keep reading books from them because once in a while they come up with gems of the books. For once, take I too had a love story. Even Durjoy Datta was launched by Srishti Publishers. And this month they have launched two gems, again - The Homing Pigeon and The Secret of the Dark.

Apart from the above mentioned points, affordability is another aspect most cultivated by Srishti Publishers. Most of their books cost around hundred bucks or so.

Since this book is pretty thick (340 pages), unlike other books by Srishti and the quality of the story is good, the book has been priced ₹195.

Story and other aspects:
Being a Fantasy, the author has to explain the details of the setting of the story from the very scratch. The narrating style of the author must be captivating for the reader enough to make him the very realms of the reality. That is what I felt during this read. I started to believe in a world of Gaya, which was divided into two large continents and everything else about the world, mentioned in the story. The fictional map of Gaya, displayed in the starting pages of the book was brilliant. Brilliant is the idea of the map, not the map itself. I think better computerized map would have done a great deal understanding the map. The idea of naming the continents of Gaya as 'The land of setting Sun' and 'The land of rising Sun' was witty.

The aspect of a book I am most keen about is the language. It is the language of the story that creates or shatters the interest of the reader. Readers shouldn't be made to refer dictionary every second page. Neither they should be made to go through a single line more than once. The Secret of the Dark has a very simple language, which would flow as smooth as a hot knife through butter. The writer uses just the correct word to explain the situation, which makes it a pleasant breeze to read this book.

Another best part of this book is its story. Also, story is one reason I rate it four instead of five.

Story is very captivating. The author tried his best to hook the reader to the book by maintaining an unwavering suspense. But at some point of the times, the unending names of the characters gets on the nerve. Add to that, the irritating and confusing Greek-sounding names like Damian, Crixus, Torman, etc. In fact, I couldn't even pronounce a few of them.

There is another story - The story of princess Alexandria - in the book, that runs parallel to the main story. I was waiting for the stories to interject at one point, but that point never came. Also, I don't understand the significance of that story. Maybe, I have missed the part which explained its significance when I was busy racing through the words, trying to break the suspense.

Even at times, the details of the fights got me snoring. Maybe it could be just me, who is bored by the fighting sequences in the novels.

I felt that the end of the story was pretty abrupt. The last one chapter or two was bit of a rush. It was the suspense breaking chapter. There were too much information to relate and understand. The end was pretty sudden. I was left with a feeling - "Is the story over?"

Overall, the story was good. Language was smooth. Plot is interesting. Quiet a good read for this summer.

Recommendations:
I would recommend this book to Fantasy lovers, who are looking for a Action-Fantasy rather than a Romantic-Fantasy.


Title : The Secrets of the Dark

Tagline : ...the debt of blood is never repaid 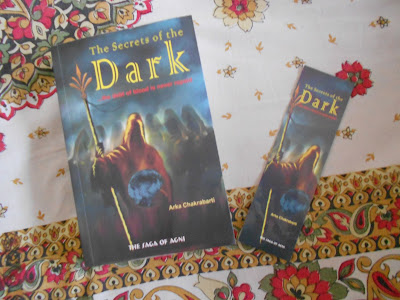 I always love the exclusive bookmarks of a book. Thank you, Arup.