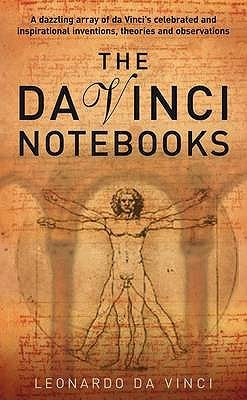 I never knew who da Vinci was. It was only after watching the movie, The Da Vinci Code, I came to understand that Leonardo da Vinci was a person who creates puzzles for his time pass. He  also drew few paintings like Mona Lisa and The Last Supper (during that time, I didn't even know what was the significance of the painting).

Slowly, there after I came to learn Leonardo was no puzzler (person who creates puzzles), but an artist. It is only after I read this book, I came to understand the reason behind his fame. The text in this book has literally swept me off my feet. Though the methods he exercised were bizarre and awkward to understate. (He got the general of the army to strip all this clothes and made him lie stark naked to draw some painting!!)

Description (From the jacket - hand typed):
For everyone who has read and enjoyed Dan Brown's The Da Vinci Code, here is an exceptional insight into da Vinci's inner world, in his own words and images.

Painters, sculptors, engineer; mathematician, philosopher, inventor; architect, anatomist and naturalist - da Vinci's talents are seemingly endless. This is new selection from the notebooks, bursting with imagination and quirkiness, sometimes cryptic or even incomprehensible, is the perfect introduction to the mysteries of Leonardo da Vinci. Those who know him as the celebrated painter of The Last Supper and the Mona Lisa will be astonished and intrigues by this sparkling testament to one of greatest minds of Western Civilization.

I rated this book four. And I rate da Vinci the whole five!!

For me, before I read this book, painting was something way over my head. There are some painting I came across which are like a baby's puke of different colours on a canvas and that would price over a million rupees! Anyone can mix some colours and throw them on a canvas and call it a painting.

After reading this book, there are two types of paintings for me - paintings like I have mentioned above and the paintings of da Vinci's.

Of course, da Vinci made the general of the army to strip off his cloths and lie down naked, but just so understand the anatomy of humans.

It is just amazing to know that there was so much background work needed for painting. I doubt how many painters now-a-days have so much knowledge.

I don't want to prolong this review any more. I just want to say that after reading this book, I just have one word for da Vinci - Respect.

Recommendations:
For all those people, who love art, artists and wanna-be artists.