A Maverick Heart: Between Love and Life by Ravindra Shukla 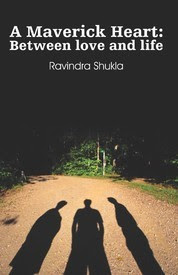 Resonance -  We often use the term, “frequency matching” in our daily life to define compatibility. Our frequency does not match, we do not get along? We are not in sync? We are not on the same page etc?

When people of similar frequencies (wavelengths or within the same range) come together – output is not a simple sum of individual work, but exponential. In science we term this phenomenon as resonance. Output at this stage is beyond any logical limit.

Three young kids, with different family backgrounds and outlook meet during their graduation days at IIT-Bombay campus and become close friends. Although, individually they are in sync, but the same is not true for their interaction with the world.

How will their relation withstand the conflict of family and society pressure?

How do their character shape out, as they traverse from an educational environment through the corporate world to the realm of the social-political world?

Inspired by the real events across the globe from the last decade, Ravindra Shukla brings you the characters based story – struggle and triumphs of a young generation and their relevance in the current socio-eco-political era.

About the author (from the book):
Ravindra Shukla is an engineering graduate from the Indian Institute of Technology Bombay. He has been working in emerging technology and business analytics in IT software technology. His professional experience includes working with consulting firms – PWC and IBM in USA for 15+ years. He is a member of the Film Writers Association, Mumbai. His interest includes – writing fiction, literature and movie scripts apart from sports, movie and travelling across the globe. 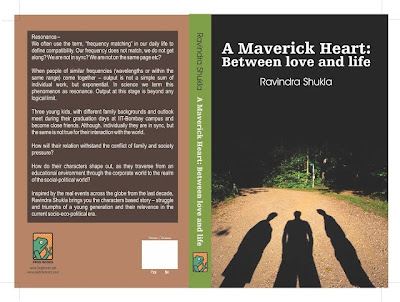 Yet, it took sometime before I deciphered who was the one to photograph, because I could notice that none of them seems like holding a camera. There is a chance the the person on the left captured the snap. But if it is the case, the middle person could have been featured in the center of the picture. In fact, I spent more time thinking of ways to capture the like of this image than reading the whole book.

If you are still wondering about how the image was captured, you could contact the cover designer, Mishta Roy. Only that way, you could be sure. As for me, I believe that a fourth person, who is out of the way of the light, captured the image focusing from above the center person.

However, if I am asked to rate the cover design on a scale of 5, I would rate it 2.5. It is not an eye-magnet, neither a boring stuff. It had some concept. Contemporary readers will look into it. Experienced readers will never check out the shelf in which this book lay.

Publishers:
Frog Books. This is my second book from this publisher/imprint. The other one being Seven Days Without You by Anmol Rana. I was disappointed about the first book, too. Not to mention, both the books overlap with their negatives, to very large extent, which are detailed on the later part of the review. Though, Frog Books is an imprint of Leadstart Corp, I see that there is a wide range of diversity between the books of this imprint and other imprints. This might hurt feelings of some people or might halt the flow of books from these publishers to me, but I have to say that there is a large deal of partiality shown to different authors. If I am allowed, I think the concept of imprints in itself is a huge setback for publishing houses. However, in the end, I can do little and the world goes on the way it is, right now.

I would take liberty to ask a doubt to the author, himself. How did you come up with a blurb like that?

Seriously, if anyone goes through the description on the back of the book (also mentioned in the plot section of the review) they will think that the book is misplaced in the Fiction shelf because it sounds more like a Physics text-book than a Fictitious novel. Resonance. Frequencies. Output. Come on, man, don't you want people to pick up your book. I suggest author to reconsider his choice of blurb for his book.

If you overlook all the above mentioned aspects and come across to read the book, you will love the first chapter. Though, I always hated the the poems in a story, I liked it in this book. It was a very good start, enough to induce interest into the readers, who are scared of the thick size of the book and tiny font. Yeah, weight of the book itself has scared me. Add to that, about 400 pages of medium sized font prose, every paragraph separated with blank space - the typical Leadstart Corp publishing style.

Post the first chapter, I dozed off after reading every chapter. To be more frank, I dozed off multiple times in middle of some chapters. I don't understand why such scrutinized description of a scene is very important. Only someone who has experienced every second of the story could write with so much detail. Even then, I don't think there should so much deatiling to the story. It bores not just me, but any reader. A lot of dialogues missed quotation marks ( " ). The book could use a great deal of editing.

Readers, I want to make it clear that I don't hold any personal grudge against the author. I know, some, if not all, of my words might sound harsh to both author and publishers, but I am here to provide a honest feedback and I know no politer way expressing my feelings. I say this because this is not the end of negatives points of the book, there are more to it and I also say that there are positive points to it, too. So, read on.

The only plus point about the entire book is the story. Or rather, the concept of the story. The never-ending list of the negatives will discourage any reader with a right mind. The concept of story dealing with the corrupt politics, Indian parents blind-preferences to NRI grooms, various conflicts in Indian society, women's struggle against their will and ethics, to name a few.


Final Verdict:
I wouldn't give this book a second look, if ever I come across it. Shukla ji, you must have taken more care of the story and the book, too.

Recommendations:
I would recommend it to no one. I guess it is better that way. Some books should be left unread...


"This book review is a part of The Readers Cosmos Book Review Program. To get free books visit thereaderscosmos.blogspot.com."


Title: A Maverick Heart: Between Heart and Love

Reviewed for: Nimi Vashi (of thereaderscosmos.blogspot.in)

For best deal of this book: