The Redeemers by Suresh Taneja 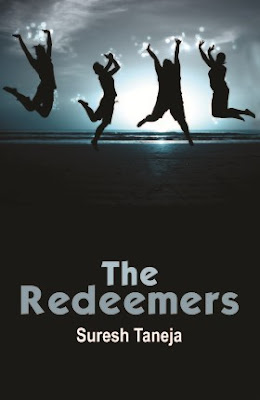 
It is a pleasure reading this book. First of all, it is a saving grace for Frog Books, whose reputation was declining with every book I read from them, in my view. But this one was one of its kind from them. Notably, It had no editorial/typographical mistakes.

However, this review doesn't contain the information about the author, since this isn't his debut novel and he is already a published author of We Can Pull It.

Every aspect of the book is, at minimum, average. Not one aspect of it dipped below average!

Trailer for the Book:

One bizarre vacation marked a turning point in the lives of four teenage friends. It dawned upon them that corruption and malpractices had become rampant and deeply ingrained in our culture. They felt anguished and shocked at the shameful state of affairs.

They pledged to redeem and change the destiny of the country. They had only two weeks of vacation left to take some big initiatives. The pressure on them was immense. Status quo or failure was not an option for them.

Read the inspirational story of a unique movement masterminded by youngsters through innovative ideas and creative thinking. Not a single family could escape from its unrelenting onslaught. It was a rewarding outcome for their persistence and hard work, as they nostalgically recall in 2030.

My take on the book:
Cover design:
The cover design must be depicting the four lead character, who are inseparable and closest of friends. Its relativeness to the story ends there.

In fact, I recollect seeing the same picture, cropped only to the four people, bring used in one picture-greeting on Facebook, wishing a 'Very Happy Friendship Day.'

Frankly, I would rate the cover design a 2.5 outta 5. It is just average and nothing more.

I noticed that, for the first time, all three sides of the cover design match in colour.

Publishers:
Frog Books. They are an imprint of Leadstart Corps. Recently, I have received about three books from these publishers and everyone of them disappointed me no end. Then I came across, Shades of Shadows by Pushpam Singh. It was the first glint of hope, which was widened to a ray by this book. Frog Books is taking up and I expect, within no time, there will be more books from them very soon.

Hoping to read more of good books from them...

Language, narration and editing:
The language used by the author is one of the best. I can not say that there were no difficult words used in his narration, but the words were easy to understand according to the pretext. To most extent, the author kept the language simple and very understandable. If there were shorter paragraphs, the book would have easily qualified for a breezy read.

For the first 30 pages or so, the story was pretty boring and slow. Of course, the first part, dated sometime in 2030, was very interesting. I highlighted the lines like, "1 INR = 100 USD". It was very dreamy and thought-provoking. Then came the actual part where the change the protagonists tidy up to start their trek to change India. Then on, it is the test of reader's patience and innovative ideas. However, the narration was at its perfect best.

I don't know who edited this book, but I must say that he/she had done a very good work. That's the best and elating part of the book.

Story and other aspects:
First of all, I must thank author profusely for his beautiful message and the signature on the first page of the book. 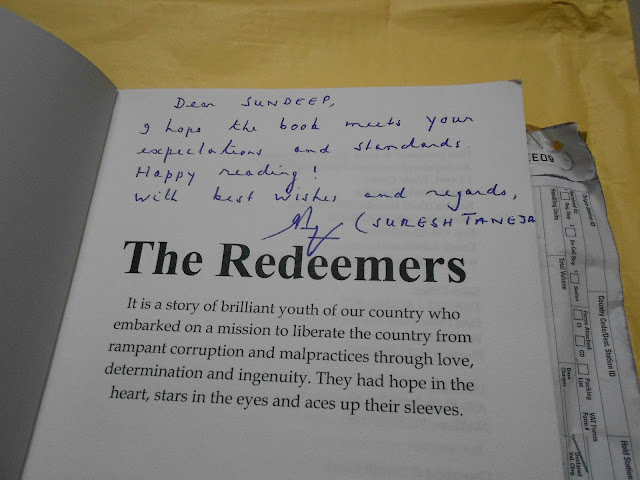 I also loved the mini blurb mentioned on the first page of the book and also which it should have mentioned like, 'by *author's name*, it read, 'As imagined by Suresh Taneja'.

The story was pretty interesting. Well, the plot itself was. But maybe, it would come as a disappointment for some readers to know the way the protagonists used to change the country. To come, it may come as ineffective and absurd in real-life and for others, it might sound genuine and workable. For me, it seems workable.

At first, the story goes on like the protagonists face no hitch with their idea to cut down corruption. It is too much to ask for and a huge drawback for the story. Some good opposing force, a powerful resistance should have been instilled into the story to add some thrill-quotient to it. Considering the tactical idea the protagonists come up with, there is little scope of opposition, though, but the author has taken care to cover each and every loophole in the story by considering, narrating and solving it.

Final verdict:
On the whole, it was a good book worth read. Very innovative and thought-provoking. Though I feel like the author had stolen the plot off my hands (I am joking), I loved the story. However, I should mention, there could be more to the story. I feel like the author hasn't used the whole weight that the plot carried. That was one of the few, rather only one, negatives about the book.

Recommendations:
To everyone patriotic and who dream that one day India would be a ultimate force...!