The Guardians of Karma by Mohan Vizhakat 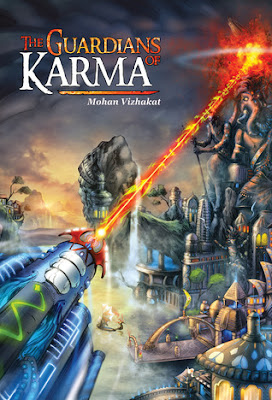 Like many other books from Srishti, this book too was sent by Arup Bose.

When I first received this book (I received it like this) I was damn excited. The cover gives the impression of a sci-fi. And I am damn excited about sci-fis.

The Guardians of Karma. What a name? I had real high stakes before starting reading this book sometime around last weekend.

Prehistoric times beyond the mists of vedic India - the forgotten era of ‘first wave’ civilisations.

Around 10500 BCE, with sea levels much lower than they are today, and mainland continents still largely covered with ice, the primary centres of Indian civilisation were dominated by two highly advanced nation states – Dev Lok and Daityan Empire. Spiritually-inclined Devas lived in harmony with nature, whereas Daityas believed in brute force technologies for rapid prosperity and material gratification. Steady inundation of the tropical islands created a crisis, particularly for Daityas. To fuel their hunger for material resources, the aggressive Daityas proceeded to invade other nations.

Warrior monk Haŕa becomes the sole hope of Dev Lok to prevent defeat and abject subjugation. However, before he can help them, Haŕa must undertake the ultimate journey of spirituality to pass beyond the barrier of death itself and engage with the astral personae of Lord Rudra - one of three extra-terrestrial progenitors of humanity.

This action-packed mythological science fiction takes the readers through the exotic cities of Amaravati, Atalantpuri (Atlantis?), and traces the arduous journey to Mount Kailash through Sarparanya. The story unfolds the philosophy of Karma within the backdrop of love, passion, greed, war, tragedy and spirituality that characterised these ancient times.

Will Haŕa be able to check the Daityan aggression in time to correct the course of Karma? Will he be able to wield the viman ‘Pinaka’ against the central seat of Daityan power – the indestructible citadels of Tripura? Is he the one who will glorify the name of Lord Shiva as Tripurantaka – the mighty destroyer of Tripura?

Are the epics and mythological legacies of India just reconstructions during vedic age, based on fragmented records of real events that happened during prehistoric times? For example is it possible that the destruction of 'Tripura' as described in Indian scriptures and 'Atlantis' of Greek mythology are both reconstructions of the same event that happened before the worldwide deluge or pralay towards the end of ice-age?

The paperback version of this book is now available at most online bookstores in India.

About the Author (from the jacket):
Mohan Vizhakat is a senior management professional stationed at Bangalore, India. The author’s keen interest in ancient Indian scriptures helped him weave together this intriguing mythological science fiction, based on a fantastic legend regarding violent destruction of the fabulous triple cities of Tripura(Atlantis?). He is now in the process of writing a sequel to this book.

Our review...:
Publishers:
Srishti Publishers. Lately, I started to notice a new-found change in the books of the publishers. The books are no more immature and silly. They are printing more serious stuff. In fact, they have built a firm step of standard. Srishti don't signify cheap, college love stories. Not anymore. We can expect widely diverse stories from them, from now. Can't wait to read more books from them.

You can find other books we received from Srishti here: Book Reviewwala with Srishti

Detailed Review:
When I first received this book, I was pretty elated. Sci-fi always fascinated me. I didn't read much of them, too. Courtesy the tbr that is almost always fully stacked. For the first BR has received a sci-fi for reviewing and I was excitingly waiting to read it.

I think the cover pic needs a good deal of editing to it. It seems like it is extracted from a B-grade, centuries old, sci-fi comic. A laser hitting some structure. Not to say, the structure seems more like Lord Ganesh with his unmistakable elephant face. Lasers, without any doubt, give the impression of sci-fi. So ultimately the cover design delivers the genre of the pic. Well, actually, one genre of many genres that the book is associated with.

On the whole, the cover design is good, but not attractive. It is apt, but not entirely apt. So I would rate it 2.5 out of 5 stars.

Like many other books, I didn't read the plot/description of the book before reading it. So I started reading this book with nothing other than the impression given by the cover pic.

I was as excited as a child while reading the first 25 pages. It is when I learnt that this is just another story inspired from Lord Shiva. Come on, guys, you can do better than re-making old epics. That was reaction after the first 50 pages.

Then on my resolve and interest to read this book kept deteriorating that I knew it would be long time before I complete reading it. I felt I should have chose another book for this book. It took a whole week to read this book.

Not to mention, this book seemed very much like Age Of Hiblisk by Sumukh Naik.

The whole idea of the book seemed pretty absurd. Author spun this story around the fact that due to global warming many centuries ago, many civilization were submerged and lost in the sands of time. What if those civilizations had better technology than our technologies now? What if the epics told by our fore-fathers and the magical weapons used by them in the wars are not so magical but signified the actual technological advancement of their civilization? That's what the story was spun around. Global warming.

It seems legit to some extent, but then if those civilizations were so advanced in terms of technology, why couldn't they avert the approaching danger. Why didn't they flee to other parts of the world? I couldn't understand.

On the other hand, I was bored to read another of Shiva Purana retold.

The story was not bad, though, but the author's boring narration makes it a tiresome and laborious read. The book would make do with a great deal of editing, or rather trimming. I always wonder, if you are so good with words and your stories are so good, why elaborate and spoil the thrill. It was never in my capacity to reckon the actual reason. I leave it to those who has the faculty to achieve it.

Final Verdict:
Experimenting is good. The concept of merging various genres is also good, but it would be better if you re-consider the story twice, weighing the pros and cons again and again, before penning it down. Creative, but boring overall.

Recommendations:
People who know Shiva Purana will enjoy this book better than others. If you want try something new - potpourri of various genres - this is the one for you.

Title: The Guardians of Karma

The best deal of the book could be found here: