The Off-Site Tamasha by Abhay Nagarajan 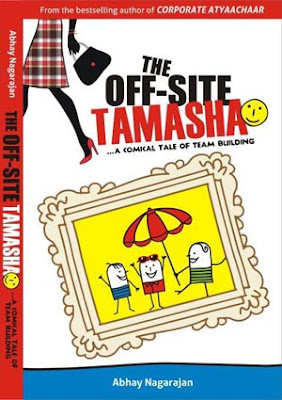 This is the second book from the Abhay Nagarajan. The review of the first book, The Corporate Atyaachaar, you can find here.

Well, like the author had said, there is little connection between the first novel and this one. Save for the lead characters and few other puny characteristics, there is little connection, or need for connection, between the novels. They differ diversely in their own ways. While the first novel is the comical tale of a office doormat, which dealt best part with finance and financial world, this book dealt gravely with the humorous part and the off-site trip the Corporate Atyaachaar team undertakes.

Plot (from the jacket):
In THE OFF-SITE TAMASHA…a comical tale of team building, a team of financial advisors are headed to Kyari for a relaxing three day company off-site. The team includes a dominating boss, his docile subordinate and a rich colleague. The colleague argues with the boss during the various team building games resulting in hilarious outcomes.

The predictably planned off-site changes rather dramatically, with the arrival of two mysterious women. They get the attention of the three men. Each of them is sex obsessed and lusts after the women in the hope of a sexual encounter. What follows is a series of interactions- part comical, part sexual, part revelry and part debauchery with telling consequences.

What the men don't know is that, the femme fatales have an agenda of their own. They have a job to finish....

Who are these women? What do they want?
Who will finally come out on 'top' in this carnal pursuit with the women?
Will it be the married boss? ...The unmarried subordinate? ...Or the rich but rather ugly looking colleague?

My take on the book:
Cover design:
According to me, the first book's cover design was better than this one. This one is less attractive and did little to depict the story held by the book.

Language:
The language of this book is as simple as anything could get. In addition to that, author has this tickling sense of humor, which is a real positive to the book. But, it should be admitted that, after reading the book, there comes one point where the readers gets bored even in the presence of good humor.

Story and other aspects:
If you thinking of reading this book and restrained yourself thinking that this one is the sequel of Corporate Atyaachar, then don't hesitate. This book isn't the sequel of the other book. In fact, both the books have their own flow of stream. Though their taglines sound connective, though the lead characters are similar, the story has little in common and the same type of humor is reflected in this book, too.

I couldn't help but notice the size of the book. An extra 70 pages or so were added to the first book, making this book 271 pages thick! Too much humor is too much discouraging. I think author should have got the book trimmed to minimum to make it even readable. To top that, the font size of these publishers are very small that it was a torturous task to get through many parts of the book.

To add to my misery, though the prose was well spaced, the lines extended even to the 1 centimeter from the bottom rim of the page. I don't recollect reading any book with such a low bottom margin!

Italics were gravely miss used throughout the read. There are many such editorial mistakes right from the start.

The positive about the story is the humor and the story, itself. The humor keeps the reader intrigued, though only for a short run. The selection of story is pretty interesting. It had various adventurous parts and travelling part, which would have, in any other book, interested me. But the other negatives were stronger.

You might have the monotony of the story if you learn that the whole book is divided into 5 parts in whole. The first part deals with the departure. The next three parts deal with the three days on the off-site. The last and the final part deal with the protagonist's return journey. Well, those 5 parts was dragged to fill 271 pages!

Final verdict:
Very monotonous and the humor is too sagging. The book needs a lot of trimming. Torturous read.

Recommendations:
It is not recommendable to anyone. Maybe humor lovers would love it. Or people who are seeking a change from typical college romances would like it.

The best deal of the book can be found here: