Wise Enough to be Foolish by Gauri Jayaram 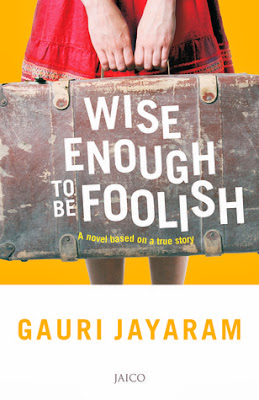 This is one of two books I have received first from Jaico Publishers. It didn't take much time for the other three books to add up to the list, too. So by the time I started reading this book, I had to make a choice between five books. How I settled upon this book? Well, honestly, this seemed to be most appealing among the five books. I wasn't yet ready for the Sherlock Holmes.

Before I get on with the review, I would like to thank Marina Fernandes for contacting me, in the first place, and especially, for sending this book over (even though I was one who requested to review the book).

For more details of Jaico Publishers and out relation with them, go here: BR with Jaico.

Wise Enough to Be Foolish is a fictionalized memoir that traces the journey of an Indian girl’s life, with all its challenges and delightful surprises, as she blossoms from an insecure child into a confident young woman. This roller-coaster ride of adventure, laughter and heartache, as she balances her love life with her struggle for independence, will keep you guessing – What rules will she break next? How far will she go to find herself?

About the author (from the jacket):
Mother of two girls, amateur athlete, part-time writer, management school drop-out, entrepreneur, in full time employment with the world’s largest escorted touring company and the woman behind the Active Holiday Company, Gauri Jayaram is a little bit of many things and still not satisfied. She frequently combines her love for long distance running with rock music.

Our review:
Cover design:
The cover design of this book isn't flashy. It isn't dull, either. It is just sweet and simple. Just like the story enveloped between the covers. The cover pic pretty much depicts the basic idea of the story.

What the cover pic depicts: A small town (or a middle-class girl), who has little exposure to the cruel, outside world, packs her stuff and ventures unknown wilderness of urban.

What the story actually is: The story of a girl from a middle-class family, who is rebellious by nature - the black sheep of the family.

Publishers:
Jaico Publishers. Whom I never knew existed I received a book from them. Whom I thought were new publishers when I received their first book. Whom I learnt to be one of the oldest and biggest publishers of India!

Story and other aspects of the story:
A line on the cover of the book says, 'A novel based on a true story'. Actually it is not big a good sign to attract readers. It is the general perception that fictions are far exciting than non-fictions. And to some extent, that's true, too. But, in the cases of the books like this one, the perception is entirely wrong. As wrong as wrong could get. In fact, this story is not lesser than a fiction. In simple words, the story is too exciting to be a non-fiction!

However, in the description of the book, the story is called a 'fictionalized memoir'. It is my first encounter with that phrase, whatever that meant. Frankly, I never paid heed to learn the actual meaning of the word, 'memoir', until Salman Rushdie wrote 'Joseph Anton'.

Even then, I perceived that the author has written a memoir of some close friend. But to my surprise, it is author's memoir of herself. If you ask me, writing autobiography or oneself's memoir is a courageous act. Particularly when it is so carelessly honest. Well, 'careless' isn't the exact word. It is, like said by Abhinay Deo, Director of Delhi Belly, 'scarily honest'. That is one trait of the book that doesn't bore the reader at all.

The language of the author is very simple making it a easy and breezy read. The narration is first person and throughout the read I didn't, not even once, feel bored. I usually read books authored by woman only so that I could understand them a little better. After reading them, I don't know which way - closer or even far into confusion - my step headed. However I enjoyed this one.

Gauri, the protagonist and the author of the story, I felt pretty much like a guy. Even she agreed to be a tomboy. The fact is that I hated tomboys. Even if they are the protagonists of the book I am reading. But eventually as the read progressed I was lost more and more into the story that I paid little heed to the tomboy trait of the lead. Perhaps, the tomboy aspect of the lead disappeared, fairly. Or maybe not, but the author was creative enough to intrigue any kind of a reader. Not to mention, I have seen many similarities between me and the lead. Even our thoughts overlapped to large extent.

To talk of the cons, well, there aren't many, if any. Yeah, save for the tiny font size and little spacing between the lines there wasn't any negative points about the book I could remember.

Final Verdict:
The book was awesome. No other words.

Recommendations:
I almost recommend it to everyone. It is no chick-lit, anyway. Read it and I assure you wouldn't regret it.

Title: Wise Enough to be Foolish

Tagline: A novel based on a true story