My Beloved's MBA Plans by Disha 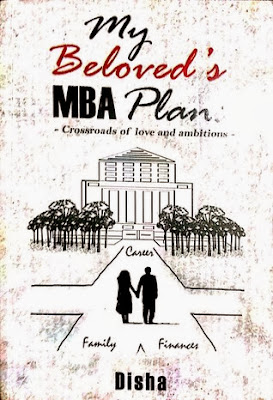 Unlike various other books from Srishti, we have received this book singly. You know, Srishti ships a bunch of new releases of that month, it is rare to receive a single book. But then, there were only two books that were released in the previous month.

When Arup Bose mailed asking me whether I was interested in reviewing this book. I didn't accept it right away. There was already a long stack of books and I don't want to be greedy, but then I noticed various other blogs receiving the book. I thought it must be interesting and asked Arup to send the book over.

I received a small, almost weightless packet. I was shocked to find so thin a book inside it. Seriously the book is only 110 pages! That is one reason, it has been one of the few books I have completed reading in a day.

So let me thank Arup Bose for sending over a good book like this and believe me, man, you keep our blog very much alive... ;-)

Read on to discover how Vivek’s MBA course turns out to be quite an adventurous journey with his wife Divya and their two kids. For Arpita, it is a second chance at love. Payal and Nitin make the campus their home while Geet faces a tragic loss. Join Suraj and Priya as they break away from the family business to carve out a path for themselves and discover how Rahul and Dimple spend an unusual honeymoon. These are just a few stories from this colorful collection set against the backdrop of life on campus and
aspirations for an MBA degree.
The book is a ride through different shades of life and experiences. Whether you are single or married, this book is an absolute must read for anyone who wishes to take an unconventional decision in life.

About the author (from the jacket):
An IIM-Calcutta alumnus, Disha loves to express herself through her poems and short stories. Be it travelling with friends, philosophizing on life, working on a social project through her NGO or cooking for her family, Disha comes across as a multi-faceted person with an energetic smile. My Beloved's MBA Plans is her debut novel. Disha can be reached at dreamerdisha@gmail.com.

Our review:
Cover design:
There is nothing striking or interesting about the cover design. It is plain white with black spreads and depicting a could walking towards, what seems like a, hospital (it is a university in actual to the story).

The cover design is very boring. A great deal of effort could have been shown in designing the cover. But nonetheless very philosophical. It depicts the cross-roads of life. The couple on the cover picture are represented heading towards 'Career' leaving behind/from 'Family' and 'Finances'.

Publishers:
Srishti Publishers. It is not a secret how Srishti has been a constant supporter of our blog. It is a prideful aspect. Especially, because they are coming up with more shining books like this one.

The books we received from Srishti can be found here: BR with Srishti

Story and other aspects of the book:
The best aspect of the book is its size. It has only 110 pages! That is the reason I could complete it in 1 day! To top that the size of the font and the spacing was large enough to bubble up interest in me. I damn like the anatomy of this book!

About the plot, I can say nothing more than the description in the former half of the review says. It is exactly what the book is about. A group of stories of people who read in IIMs against all odds.

This book is a work of non-fiction. It is the common perception that non-fictions are boring. Well, this book is just the same. It was boring. But believe me, it would have needed a great deal of concentration and determination for me to complete this book had it been any thicker; with more number of pages. The sheer font size and the few pages kept me going.

Considering the basic plot, the book justifies it to the hilt, but as far as the entertainment quotient is considered, this book is a downer. A bunch of people and a bunch of stories. After about five stories - there are 16, in total - it all feels the same. Safe for two or three, they are the same. Yet, the size of the book does great deal to keep the reader going.

Keeping everything aside. I felt the story lacked the realities. I know the story was written as narrated by various people, I see that the narration was not completely true. I felt the people were hiding some dark facts, but then, how can I be sure. Or maybe it is just my basic arguing instincts. But still, how can lovers bear a year-long separation, I still wonder. People have become so practical-minded, they can do anything for their career? Well, it is none of my business and I will not understand these things any sooner.

Final verdict:
Overall, the book is worth reading. Only if you have read and liked the plot.

Recommendations:
To practical-minded people and for those who are into stuff like giving their partners space and other bull-shit like that.

Tagline: - Crossroads of love and ambitions -

The best of this book could be found here: