The Paperback Badshah by by Abhay Nagarajan 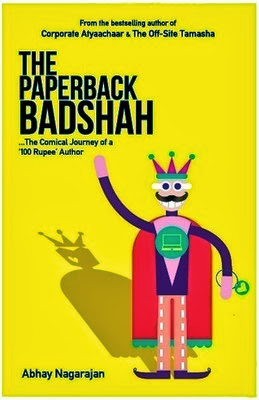 It has been some time since I received this book from both, the publisher and the author. Due to the long stack of books piled for reviewing and the other author of blog, Srinivas doing little to help, I was pretty caught up. So finally I completed completed this book and am reviewing it...

Let me start the review by thanking both of them for sending over their books. Abhay, had sent all three of his books, yet published, for reviewing. It was the first for us. No author sent a mass of his books for reviewing. It was quite a stunt because we couldn't quite rate the book as per author's expectation. But come on, man, no soft corners when it come to reviews. Honest and Unbiased. Remember? I hope just that the author takes it in good sport and wouldn't build up grudge on bad rating.

Other books we received from Srishti can be see here: BR with Srishti

Reviews of other books of Abhay can be found here: Abhay Nagarajan Books

Plot (from the jacket):
‘In life…you can choose to become a specialist or a generalist. But in love, please don’t become a reluctant fundamentalist. Instead become a love scientist.’
-Raghu Balakrishnan

Raghu Balakrishnan is a laidback 25 year old, who quits his regular job as a financial advisor to focus single-mindedly on his dream of becoming a published author in India. He stays with his parents. They reluctantly tolerate his new found creative ‘nonsense’ as he works on his book, a love story, which he titles The Paperback Badshah.
As time passes by, he realizes that writing the book is just one part of the dream.
How did one go about getting it published?
What about the marketing and promotion?
What about reactions from the readers?
Would it open up the faucets of love in their hearts or would it irritate them, given the sheer absurdity of the plot?

Along the way, will Raghu also get lucky in matters of the heart?
Find out by joining him in his entertaining journey, as he chases his writing dream to eventually become a published ‘100 Rupee’ paperback author.

Our review:
Note: Throughout the review you come across many instances of me referring to the other two books of the author, which could serve as the combined review for all three books.

Cover design:
This is one book whose cover design has caught my fantasy, to some extent. The yellow cover with a black side-cover was a killer combination, but then slowly I started to lose my interest in the cover. It was too bright. That's what I thought firstly until my girlfriend saw the book. I usually shared my novels with my girlfriend. She took her time to read each novel. She was a miserable reader (if she isn't reading this). The day she saw this book, I was giving some other novel to her when she caught the glimpse of this one. She was so fascinated by the colour of the cover that she was adamant to read this novel only. It took a great deal of denying followed by reasoning that I was reading the book then and need to submit the review ASAP. She finally gave in and I finally learnt the actual worth of this book's cover design.

Publishers:
Srishti Publishers. Lately I have been many good books from Srishti, but this one is not particularly one of them.

Story and other aspects:
Though the author had sent all three at a time, frankly, I was more tempted to read this book first. But I calmed myself and decided to read the books chronologically.

Similarly, like the author had informed me, all three books could seldom be considered as sequels. More so when the the third is in the topic of discussion. There was at least little similarities between the other too: Corporate Atyaachaar by Abhay Nagarajan and The Off-Site Tamasha by Abhay Nagarajan. And when it comes to the third there was no similarities at all compared to the other two. Hence there is no need to read the other two books to this book and vice-versa.

When I first came across the title, tagline and the basic plot of the book, it reminded me another book - Beaten By Bhagath! by S. V. Divvaakar. They shared almost the same plot - the struggles of writing a book and getting it published. The only difference is that BBB is serious and this one is kinda funny.

Not to forget, I rated BBB 4 out of 5, which means I really enjoyed it, which further means that I had a lot of expectations from this book.

In crude words, this book didn't reach my expectation. In fact, not even close to it.

I really hated when the author brought business and commerce into the narration. I hate it when the author arranges a plot line and goes about explaining everything else. For almost one third of the book, there is no struggle from the protagonist's end to pursue the plot line.

Second thing I hate about this book, in author's narration in common, is the extensive use of Hindi words, where they are entirely unnecessary. To top that, use of Hindi words in the title itself. In all three titles!

I have come across a word yesterday - monologue. It means, a long speech by one actor in a play or movie, or as part of a theatrical or broadcast program. If allowed, I would call this book, a dialogue. The book is full of dialogues and at the start itself I was dozing off every time I started the book. No matter where I read the book, I fell asleep: bus, in class room, at home, almost everywhere. Dialogues are very important for a book. Without them the book is as good as dead. But I still wonder how such an vital aspect is transformed to a fatal one by this author!

The story starts with the introduction of a commercially successful Indian writer Tilak Bhatia, commonly to referred to as TB. I presumed him to be the protagonist and that part was the prologue, which was entirely wrong. He is what critics call the black sheep for Indian literary club. Later comes the introduction of Raghu Balakrishan, the actual protagonist, who admires TB for his success and wants to be an author someday. Raghu a regular, office-going brat like many others, who put their dreams aside in pursuit of making big bucks, pushes his dream of publishing a book aside and carries on with his job, until one day he decides to quit his job and ficus single-mindedly on writing and publishing his book. This is the story of how Raghu publishes his book, The Paperback Badshah, if at all he does? Various challenges faced by an author to publish a book. Midst all that, will he discover the various facets of love?

I would appreciate the first book - Corporate Atyaachaar - of author's for one reason: its size. The other two books are as thick as 350 pages. I always feel that a book should be limited to as minimum as possible. Of course there could be books  with more than 700 pages, but elaborate if its not necessary. Like the famous Leronard Elmore writing rule says, Eliminate the parts which readers tend to skip.

Final Verdict:
A big NO. Experimentalists are welcome nonetheless.

Recommendations:
Like I have said earlier, experimentalists are most welcome...