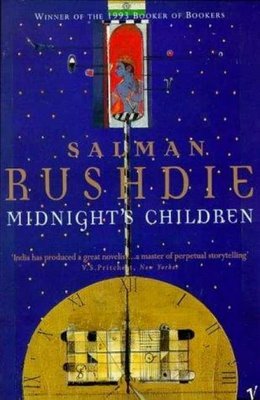 Saleem Sinai is born at the stroke of midnight on August 15, 1947, the very moment of India’s independence. Greeted by fireworks displays, cheering crowds, and Prime Minister Nehru himself, Saleem grows up to learn the ominous consequences of this coincidence. His every act is mirrored and magnified in events that sway the course of national affairs; his health and well-being are inextricably bound to those of his nation; his life is inseparable, at times indistinguishable, from the history of his country. Perhaps most remarkable are the telepathic powers linking him with India’s 1,000 other “midnight’s children,” all born in that initial hour and endowed with magical gifts.

This novel is at once a fascinating family saga and an astonishing evocation of a vast land and its people–a brilliant incarnation of the universal human comedy. Twenty-five years after its publication, Midnight’ s Children stands apart as both an epochal work of fiction and a brilliant performance by one of the great literary voices of our time

My take on the book:
Oh, what hype! This book has acquired so much positive acclaim that the mere act of reading it gives a noble feeling. I had always been a Booker Fan. Not that I have read many Booker winners, but I own almost all of them. So crazy I am about Booker winners. But then this had won Booker of the Bookers. What else could I say? It hadn't left the front bookshelf, never from my eye sight. I owned it and displayed as if a prized possession. Especially so, because it's a '95 edition with the dog-eared corners and yellowing pages, and the scent so irresistible that I had to, every time, it back to the shelf forcibly, so that I wouldn't be tempted to read it.

Why hold back when I had so strong an urge to read the book? Simple. Because I don't want to get done with it so soon. Strange, yeah. Give it a thought. I leave the rest for you guys....

From the very first page, it is the prose of the book that hits anyone. Some really enthusiast readers would love it and others will surely hate it for its complicity. I was from the former. I was spell bound by the storytelling of the author. There were many words, whose meaning I had no idea of, but I didn't mind looking up the dictionary every now and then. All because the book is a legend by what the people who had already read it claim. However, soon it started to get on my nerve and highly so, when I noticed that I was only 10 pages down for a week! At that pace, it would take me approximately a month to complete 40-pages. And it would take close to a year for me to complete this book.

I was worried. Worried to give up this book. So I took a day off, sat down and forcibly exerted myself into the book. The result was I was snoring fast asleep in no time.

After so many days, so much effort, I sit down to write this review. It was more of a declaration of inability to read this book. 'Unwilling' would be a more appropriate word. Unwilling to continue this book. I am utterly disappointed. It is beyond my comprehension how this book had won the Booker prize, how come the judges successfully completed reading this book and finally, how they had actually, later, elected it as the Booker of Bookers.

I had watched the movie after giving up the book. And it was more awful, I have to say.

Overall, the book is a entirely self-dependent. Read it for yourself and find out whether it suits you...