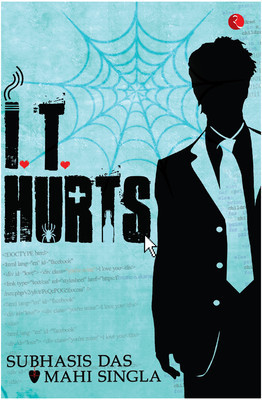 Dont we all live for a few dreams? These friends did the same.

Gautam, the rich brat, Subho, the corporate slave, Mudrika (Moody), the ambitious girl, Richa, the tomboy, Pritam, the dummy and Ali, the carefree genius-six people from different backgrounds enter in the IT industry with a common dream-to become rich.

On the very first day of his job, Gautam falls for the gorgeous nanya. But when he admits his love to her, he gets the shock of his life-she is soon to be married. Devastated, Gautam moves out of Ananyas life and finds solace with his gang of friends and in cans of beer. Corporate life and its grind helps, too and so does a move to the States. But Gautam decides to give love a second chance and flies down to Mumbai. Will he be second time lucky?

Find out in IT Hurts! a heartwarming story of new found love, old friendships and the trial and tribulations of a punishing industry.


My take on the book:
I have received this book from the author - Subho - not for reviewing. Not that he mentioned of any. So the late.

I have known the author for some now. We had been infrequently in contact and from what I know of his writing, it is no boring stuff. Though I was no mood to read a Contemporary novel about love and IT industry - especially IT industry - I decided to give it a read for the author witticism which I had come to see in his writing ever since.

Well, for one, it was a change of sorts from my now reading spree. I have been serious and acclaimed works for so long that a dash of humor and cheesiness did more good than I had anticipated.

Though I hated IT industry, which I felt could easily avoided in the story, yet was involved, the book was no more discouraging. The pace was flat - nor too fast like a thriller, nor too slow like a poem - which was a saving grace, of course.

The fatefulness turn of events in the story is one aspect I really much appreciate for a story-teller.

Overall, it was a fine read. Though it might be hard completing it in a go, which I think is very much not possible given the monotonous parts of the book, it is a refreshing read. A great tale of love and friendship...