Chronicle of a Corpse Bearer by Cyrus Mistry 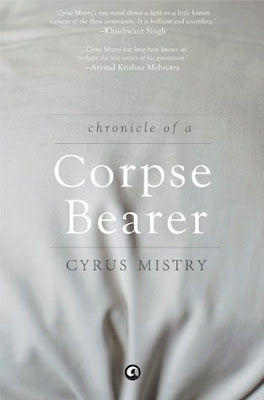 At the very edge of its many interlocking worlds, the city of Bombay conceals a near invisible community of Parsi corpse bearers, whose job it is to carry bodies of the deceased to the Towers of Silence. Segregated and shunned from society, often wretchedly poor, theirs is a lot that nobody would willingly espouse. Yet thats exactly what Phiroze Elchidana, son of a revered Parsi priest, does when he falls in love with Sepideh, the daughter of an aging corpse bearer...

Derived from a true story, Cyrus Mistrys extraordinary new novel is a moving account of tragic love that, at the same time, brings to vivid and unforgettable life the degradation experienced by those who inhabit the unforgiving margins of history.


My take on the book:
This marks many firsts for me: First Parsi story, First book by a Parsi author. First book by Cyrus Mistry (or any Mistry, for that matter).

For the fact, Aleph Publishers haven't disappointed me. Starting from Tales of Fosterganj by Ruskin Bond I have held books from this publishers at very high regard and every-single-time they did reach, if not outreach, them.

It can't be just coincidence, can it? How come every cover design of this publishers are so ... so ... terrific? I mean, one look at the cover and you have this urge of possessing the book, no matter the story. That is one reason, I started reading books from them. Also, they have got a great deal of hardbacks. Most of their inventory is filled with hardbacks and I think I must give the publishers another look for new books since it has been a long time.

The story has got a great insight into the Parsi community. Parsis are for me this exotic breed of people, who are conservative and peculiar about their customs. One such peculiar custom is the root of this story: Corpse Bearing. As far as I know, even in Hinduism, there is a close-knit community who have occupation dealing with death and funeral-related, but with Parsis, the entire concept is alien to me.

One is not allowed to touch the dead. However, dear they are. I felt disturbed by the custom. The dead are believed to carry pathogens that cause deadly diseases. Also, making a dog sniff the corpse to confirm about the death. Feeding of the corpse to the vultures. They are so disturbing and the author, in all his dare, decided to set the story in this disturbing background.

The story was pretty boring. No doubt, author claims it to be based on true events. Though there are very great emotional aspects, I couldn't really enjoy it. That's another first: First disappointment from Aleph Publishers.

In short, I didn't like the story and also the way it went. The narration was subtle. Not the best, but poetically intriguing. That's it. I am already skeptical of my intensions of reading The Radiance of Ashes by the author.

However - I add this note at the end of very few 'good' books, which I didn't like - this is strictly my personal opinion and the flavour of this book surely does vary from reader to reader...

Title: Chronicle of a Corpse Bearer