Ambuj (Guardians of the Blue Lotus #3) by Anita Shirodkar 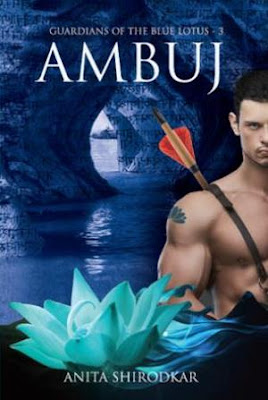 
After the Great War of Sompur, Aryavir and Sitanshu are forced to go their separate ways – one back to Kamalkund and the other to Aryavartha. As the two struggle to embrace their new roles, the great Maharajadhiraj Ambujakshan’s past sins are revealed, casting ominous shadows on the events of the present.Against all odds, Sitanshu must accomplish a seemingly impossible task set by the Maheshwari Masters. From an ancient secret cave deep inside Mount Mandeshwar to the mysterious Raven Monastery across the border of Ch’in, Sitanshu races against time to save an entire race of people from extinction. If the mother of all weapons – the Mahavidhvamsha Astra, is released, the Old World will be plunged back into Andhasaya – the darkest of ages.Written with the classic Indian ethos, Ambuj, the third part of the Guardians of the Blue Lotus Trilogy, pays homage to India's magnificent mythological heritage and takes the reader on a journey into the heart of human passions.

To read our reviews of the earlier books in the series, click the links below...

Firstly I want to thank people from Silver Spun for being very patient, even thought I was falling behind schedule to review this book and also for giving me the chance to review all the three books in the series.

Though the second book ended on a peaceful note, with no cliff hangers, after the Great War, when Aryavir and Sitanshu take their own paths trying to restore peace in their own sorts of ways.

Though everything seems peaceful at the start of this book, Aryavir and Sitanshu slowly come to know of the sins committed by Ambujakshan, in the past and its effects on their kingdom in the present. There is a mighty weapon, which when activated will push the world to near-extinction. It is in Aryavir's and Sitanshu's hand to save their people from it.

It is beautiful how the author seems to still maintain that fast pace of the story. The starting chapter took me a while but once past them, I was hooked all the way to the end.

It was a roller-coaster ride, this series. I would recommend it to all the fantasy lovers out there. There are lot of Indian mythological references which makes it a more interesting read. Beautiful characters, pacy-plotline, clearly descriptive writing. This book is highly recommended.

However, I feel they could've put more effort on the cover...

Series: Guardians of the Blue Lotus #3