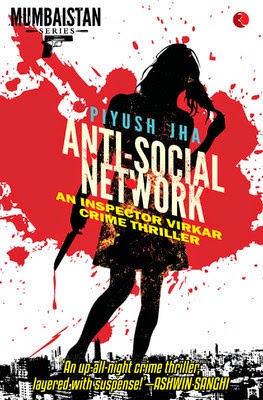 
My take on the book:
Exactly seven months ago, on this particular date I had completed reading Mumbaistan. It got me so intrigued that I was certain of reading all the books from the author. Thrillers may not be a rare treat to the Indian literary industries, but thrillers as filmy and fast-paced, and interesting as the ones from the author are pretty rare. Thriller is one genre I mostly like, but haven't explored much yet, due to their overwhelming presence in the market. Every best-selling author is a Thriller writer out there, in the international industry.

However, I couldn't get to read the author's second book - Compass Box Killer - for the lack of free time. Thanks to The Tales Pensieve Team for choosing me worthy for reviewing this book and gave me the chance of reading the author's third book.

This book is the second in the thriller series named, Inspector Virkar - the lead police all the book of the series. I haven't read the first book, though - Compass Box Killer. Yet, I was told not to worry, because both the book have little connection, like most of the thriller series novels. Fortunately.

The book needs a scrutinized re-reading. There were a lot of typographical mistakes - a lot means a couple  of them here and a couple of them there.

The flaws of the book end there. Of course, the plot and the story was too filmy. Murders were committed by so normal people, in so normal circumstances, SO NORMALLY that I was left wondering, murder is not such a big thing. It is simple and I can commit one if I had a bad day. Yet I liked it. Don't we, Indians love films?

The language was, as I always said, as smooth as a hot knife on butter. I was turning pages like a maniac. In fact, I had completed most of the book, almost 80% of it one sitting, of which I was awed myself. For last many days I was caught up with examinations and hadn't spent much time, if at all any, for reading. I was depressed that I was facing, what I assumed, is a READER'S BLOCK. Something I always feared would be the reason for me giving up reading. However, after such a impressive start with this book gave me raging inferno of hope and I am back in form!

The pace, the key aspect of any Thriller novel, is pretty fast. However, not rushing, mind you. It is fast-paced in an interesting way. Fast-paced enough to intrigue any kind of reader.

Throughout the story I had suspected a character as the culprit, the one behind all the crimes and decided that I would rate this book one star if it turns out to be so. Actually my assumption was based on the author's first novel, where all the three short-crime-stories followed a similar ending, the revelation of the culprit. In the end, the person I assumed turned out to be the real culprit and I liked the book. Why? The credits goes to the author's plotting. He had so positively revealed the suspense that I was left with no option other than to laud it.

I hated this author's detailed directions of the Mumbai. The very same aspect was appealing when I read Mumbaistan, but here, it irritated me.

On the whole, the book had kept me intrigued for best part, hence the good rating, even though with the couple of flaws I mentioned earlier...


The book was received as part of Reviewers Programme on The Tales Pensieve.