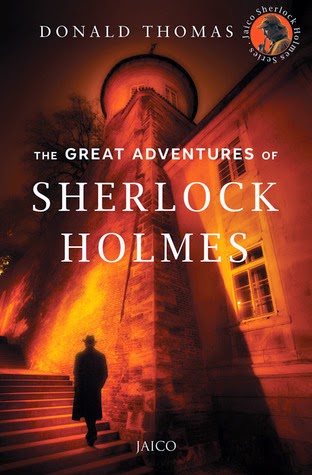 Once again the game is afoot, in these highly original stories featuring Sherlock Holmes at the height of his powers. Crossing historical fact with inventive fiction, the master of pastiche Donald Thomas plunges Holmes into London's Siege of Sidney Street, where he ratiocinates alongside Winston Churchill in obstructing an anarchists assassination plot led by Peter the Painter. In the next adventure, Holmes and Watson are confounded by the Riddle of the Zimmerman Telegram during World War I, as Holmes must employ all his wits to defeat a plan for a German led invasion of the United States. In other mystifying tales of detection, Sherlock Holmes searches for the treasures of King John, lost in 1216. Foiling a foul extortion attempt, Holmes and Watson aid in discovering Lord Byron's epic poem evoking his secret journey to Virginia. Finally the great detective, in a bravura performance, confronts a supernatural curse in Lord Arthur Savile's Crime.

My take on the book:
This is the fourth Sherlock Holmes book by Donald Thomas that I am reading. You can find the other books here...

This book consists of five tales. Different in every aspect and common on only one ground: all the incidents were real. Yeah, the backdrop and the moment during that span as described in the story have really happened. It is the very reason I hated the author's last book I read. It left the impression that the author had little or no imagination at all. Well, for some reason, this time, the very same reason started to appeal. My hunt for the facts online and in the story; the comparing; everything seemed to thrill and feed my thirst for suspense-thrillers.

The language was one aspect of the book I pretty much enjoyed. The pure English narrative of the 18th Century is spellbinding and left me wanting for more. It is peculiarly addictive.

Having reviewed many Sherlock Holmes book yet, I don't know what else to point out. However, I want to state that it is a treat to Detective story lovers. And to the readers, please don't compare these Sherlock Holmes series with that of the originals. The author had tried his best to match the rapports, but there is always some or the other differences. It is best enjoyed this way, being read with a fresh mind...