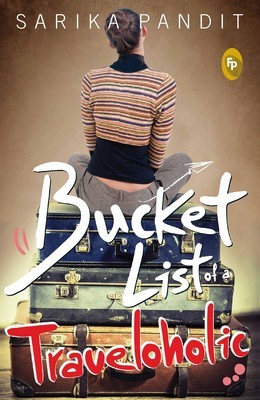 A journey of falling in love with globetrotting--this one promises to be one of the best roller-coaster reading experiences you will have this year.

My take on the book:
I had received the book a long back and had been postponing to read for a long time, because being a traveloholic myself I feared having read this book I would not be able to read it again for the first time. If you get what I mean. I am so obsessed with Travel writing and all, which evidently the industry lacks. The few which gets to print, the prices are so high that I keep staring at the book's GoodReads page!

However, now that I have justified my delay for the review of this book, I carry on with the actual review, the actual honest and unbiased review, as we call it.

From the very first look at the book, I knew it is going to be the one. I always admired (read loves) female travelers. In fact, I was trying to plot a story in which the protagonist meets his soul mate during a trip, who turns out to be a intenser traveler. Simply put, I was in love with the author even before I got to know more about her or her stories!

By the end of the book, I was stark disappointed. I realised I was building castles on a beach. Though not in the present, the castle getting washed away by the waves was a certainty. My dream girl image I had build about the author was not a overlapping.

Firstly, it is the travels, themselves. They were more classy than I had expected. If not entirely wild, I was expecting a bit of wildness here and there. Wildness as in really wild, not like downing a entire bottle of vodka and puking the guts out. Not that the author had done but there are two kinds of wild, I realised after reading this novel. Classier wild and Wilder wild. I was expecting Wilder wild, which this book is apparently not. That is when I was disappointed first and the entire book seemed to be disappointing.

Every chapter followed a frame. First the author goes about how she had decided to take the trip and how the trip had ensued. The orderliness was pretty damn boring. It would have been more interesting if the transition between the tales was smooth and not as abrupt.

As I come to think of it, I realise I was expecting too much. Leaving the book, it is my expectations of the book that have made the book so disappointing. However, considering various other aspects, the author had been pretty wild. Wilder comparing to her other counterparts. I seriously hope that woman, especially from India, venture out, like the author, into the outer world and seek the pleasure they want. I don't know a female soul that doesn't want to travel.

Overall, though the book was disappointing considering my expectations, it is a fine book. Actually, more feminine to my liking. I doubt men will enjoy this book as much as women do. In fact, women will love this book and even envy the author for what all she had done in such shorter span of her life. That declares the book as a semi-chic-lit!

Title: Bucket of a Traveloholic