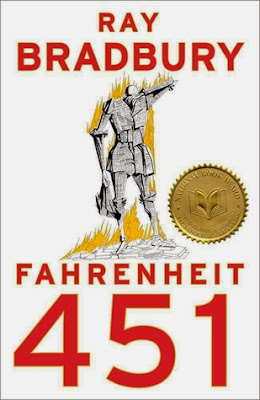 I didn't expect I would read this book. At least, not this soon. With that never-ending stack of books, I wouldn't read this book for coming quarter of a year, by when hopefully, I would be done reviewing the entire stack of tbr and would be as free as a flying seagull. (God, how poetic have I become! Well, this book is to be blamed for that!)

Now that I finally read it, how do I feel? It is not the emotion that could be literally described in words, so I decided to write this review with help of various .gifs and I hope that this review marks the start of the .gif influenced reviews I aim to write.

Plot (as per the back-cover):
Guy Montag is a fireman. In his world, where television rules and literature is on the brink of extinction, firemen start fires rather than put them out. His job is to destroy the most illegal of commodities, the printed book, along with the houses in which they are hidden.

Montag never questions the destruction and ruin his actions produce, returning each day to his bland life and wife, Mildred, who spends all day with her television “family.” But then he meets an eccentric young neighbor, Clarisse, who introduces him to a past where people didn’t live in fear, and to a present where one sees the world through the ideas in books instead of the mindless chatter of television.

When Mildred attempts suicide, and Clarisse suddenly disappears, Montag begins to question everything he has ever known. He starts hiding books in his home, and when his pilfering is discovered, the fireman has to run for his life.

Our review:
Going by the general talk of the people, in my case its Srinivas (the inexistent co-author of this blog), this book is not all about books and burning them.

Well, I have come across something else. Not something entirely different. But something else for most extent. Book burning is just part of the book and there is a lot more to it.

I started to feel a strange sense of content, which I never felt before. Perhaps, reading a book of your choice and that too, such a valuable book, does that to you. I let myself lose in those words...

It is a small book. 150 pages aren't much. I read somewhere that the first draft of the book was written by Ray Bradbury in 9 days! It was 25,000 words long and was published in a magazine under the title, The Firemen, which was later expanded to 50,000 words and published as the classic novel, Fahrenheit 451. Although, it is a small book, you wouldn't complete it in one-go or one day. He might be a avid reader, reading 1000 words per minute, but the very feel of the book would discourage anyone with such intentions. The book is best enjoyed reading word by word. Consuming word by word. Savouring them one by one. Until the book runs out of words and you still hungry for more of it.

In the process of reading the book, I read various other reviews by various other people, but recollect none of them recommending proof-reading for the book. When I expressed this to Srinivas, he said, "There is nothing wrong with language. It is is informal, so got that impression."

Well, I am not that dumb a reader. I could differentiate between informal language and typographical error. But it is still gnawing that a novel that is exactly 60 years old, which is read billions, yet no one thought it needs a good proof-reading. If you don't believe me let me give you an example...

In the second part/chapter of the book - there are three, in total - somewhere between 160-170, ends a paragraph. Its last line reads, "I will myself to do it." If it makes any sense, please comment at the bottom of the page. It didn't for me. I even checked another edition for reference and it had the same line, too. Well, as far as I know, it should have been, "I will myself have to do it."

I have this obsession of high-lighting interesting lines whenever I read any interesting books. Kudos, if you do, too. If you are like me and going to read this book, I say, refill your highlighter, if not, get equipped with two of them and take on the book for I assure you will come across a hell load of such lines to highlight. In fact, I have got whole paragraphs highlighted in my copy!

As I read the very first line of the book - It was a pleasure to burn - I was like...

And then on the first page of the book, below the title, it says... 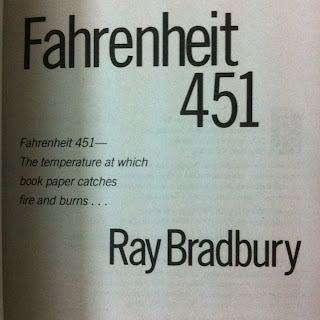 Everything about the title of the book made sense. The very line amplified my reform to read this book manifold!

Update:
After reading this book, I dug out an old Zippo lighter, which belonged to my dad, filled it with fuel and am playing with it all the time.

Final verdict:
I think the book applies completely to today's generation, who are more into television and stuff ignoring books. This book will create an awareness for the importance of reading. There were times when I used to argue that reading is such a waste of time and before I knew it, I turned into a avid reader. Reading this book, or reading in general sense, is the feeling that makes me look at other people, non-readers, and think to myself, "Puny people."

Recommendations:
This is a must to reader and a non-reader, alike. No exceptions. No left-outs. Everyone must read this book.

The best deal of the book could be found here: