The Storm in My Mind by Ayaan Basu 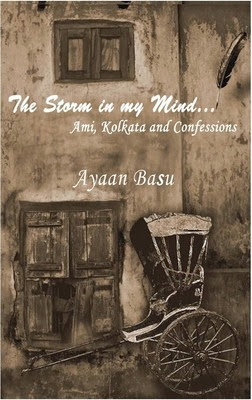 Like various other books, even this book was sent by Arup Bose - our Srishti stacker - for reviewing.

I without much thought accepted this book to review because it written by a Bengali. Though I hadn't had a chance earlier to read any book by a Bengali (I aspire to read Amitav Ghosh and others soon), I know the true artistic potential of a Bengali. For instance, take their movies. I marvel at why most of their movies are off the grid!

That reminds me of an answer by one of my friends, when I questioned, "Can't Bengalis come up with normal plots for stories?" She replied, " 'Bangalis' and 'normal', both in one sentence?"

Especially when the book has 'Kolkata' in its tagline, I had a keen interest to read this book ever since I received it. Off the records, it is due to Srinivas, the co-author of the blog that I developed this keen interest for Kolkata, Bangali authors, and Bengalis, in general.

Plot (from the jacker):
When Aryan Roy stepped into college life to fulfill his childhood dream of becoming a successful engineer, little did he know that he was in for a journey of a lifetime. Anushka and Kaira turn his sojourn into a memorable one – in both good and not-so-good senses.

The Storm in my Mind... is a collective narrative of events, habits, stereotypes and idiosyncrasies revolving around the contemporary society of Kolkata. It is a story of love as much as it is of hatred, passion, friendship, trust, misunderstandings, nostalgia and love for his city. It is the story of Aryan, his Kolkata and his mellowing heart that makes confessions of the times he has seen.

About the author (from the jacket):
Ayaan Basu is a striving author, an avid blogger and a columnist fighting his days between MNC-clad work schedule, writing and veracious travelling routine. Being single, apart from writing, he was also a singer/guitarist for a Kolkata based rock band Driftwood.

Having to his credit a collection of Bengali poems as a book and several short stories, this is his first attempt at penning a novel.

Our reivew:
To know more about various other books we received from Srishti Publishers: BR with Srishti

My most favourite aspects of this book were its slender length and the spacing. In fact, I completed this book in one-go! God, it has been so long since I completed a book in one-go. Well, it doesn't mean in a positive sense to the book. It just means that the book was thin and the language was as easy as a breeze. This book can't particularly be called a page-turner, but with a good reading-pace you keep the pages turning. So no big deal.

Ami, Kolkata and Confessions. The very tagline doesn't suit the story of the book. I know from Srinivas - the co-author - that Ami means 'I', or rather 'My'. I don't know how that constitutes to the story, but the other two words - Kolkata and Confessions - are perfectly out of sync with the story. In fact, if the author call this story confessional then every book in this world with a first-person narration is a confession. And about the Kolkatai bit, which I was anticipating from the very start of the book till the very full-stop at the end, there isn't much, if at all. Of course, there were occasional details of half a dozen or so places in the book, which seemed more like a 'Crtl C - Crtl V' work from some online article. Apart from that there is nothing about the Kolkata city that I so anticipated. Damn!!

The story is a very typical one. Anyone who is bored on a dull evening can come up with this story. Though, the author tried to add some thrill at the end by adding a twist to the story, it was a complete flop. When the entire story was sloppy what could a twist at the end do?

Apart from all this, the story needs a good deal of proof-reading. I don't know how MS-word had overlooked so many typographical mistakes. Perhaps, the author has written the book in Notepad.

Final verdict:
Overall, the book was a huge disappointment.

Recommendations:
I wouldn't recommend this book to even those who got it for free...

Title: The Storm in My Mind