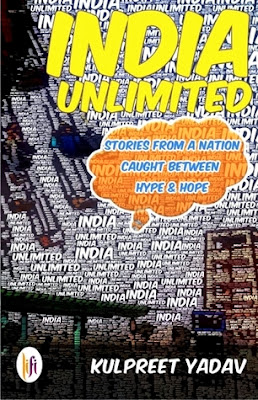 When author first contacted us to review his book, I have heard about this quite a lot of times from the other websites. Not to mention, the loads of promotions by the lifi publishers on Facebook.

Although, we are tightly packed with tbr stack, I accepted to review this book, anyway. I couldn't regret the my decision when I turned to the second page of the book, which had four simple words,

Followed by the author's signature.

I fell further in love with the book...

Plot (from the jacket):
The Indian phenomenon is capturing everyone's attention from businessmen to Hollywood stars. But how real is the Indian story on the ground? INDIA UNLIMITED is an attempt to lay bare the lives of people and their surroundings that define an ambivalent India trapped between hype and hope.

Written over the last decade, these stories are set in villages, towns and metro cities of a country under overhaul. It's an attempt to depict pain, pleasures and prejudices of everyday Indians as they adjust to the change that fate has thrust upon them. Inspired by real life incidents this collection slides through various themes like appalling lives of street children, new perceptions about love and sex, urban disorder, influence of western values, depraved spiritual gurus etc.

Note: Since the author has already published two other books - A waiting wave and A bet - this review lacks, 'about the author'.

Our review:
One of the first things I did after receiving this book is checking out about the publishers of this book - lifi publishers. Well, I liked their logo. And also the expansion of the word, lifi: Literature and Fiction. Then I moved on to check their catalog of books. I couldn't help but notice that, save for two or three, this book has the best cover design among the list. Not only in terms of cover design, I think this book is better in various other aspect. For instance, take the title of the book. That is when I noticed another new trait of the publishers. They are another publishers who pay little attention to promotion. I must agree that there are some book in the entire list that sounds 'hookingly' interesting, but the publishers do little to promote them.

What worse than a boring book getting published? A good book not making to its hilt of limelight.

Like I have mentioned before, after checking out the other cover designs from the publishers, the cover design of this book started to seem appealing. Well, I believe, the very word, 'India', in association with such a lively cover would attract my, or rather a lot of people's, attention.

I must not forget to thank the author for being gracious and sending over a signed copy of his book: 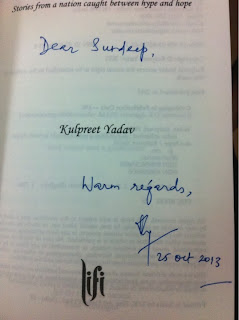 The book in discussion is an anthology that contains 31 short stories that are entirely unrelated to each other. Of course, there is only one common trait among all the stories: All of them take place in India. Apart from that I can't draw any solid similarities among the stories. Some of them had twisted, completely unexpected, ends. While some other haves no relevant end at all.

At start of the book, I felt like I was one of those Malgudi stories by R. K. Narayan. (Narayan fans don't get offended. I am not weighing this author equal with the legend, but that is the feeling I felt at the start). That feeling lasted only for the first couple of stories. After that, they were just a bunch of interesting short stories.

The weren't very long. Well, there are 31 short stories stretched along a book 200-pages thick. That calculates up to 6.45, approximately 6 pages a story. Hence it was a breeze to get through this book.

The short stories of the book were normal. But there were four stories of them which really intrigued me and the stories were ended very perfectly. They are, 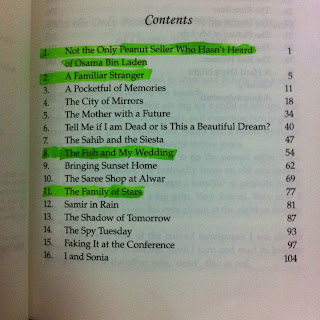 Final verdict:
On the whole, the book is worth a read. There is almost nothing negative about the book.

Tagline: Stories from nation caught between hype and hope