The Boy in the Striped Pyjamas by John Boyne 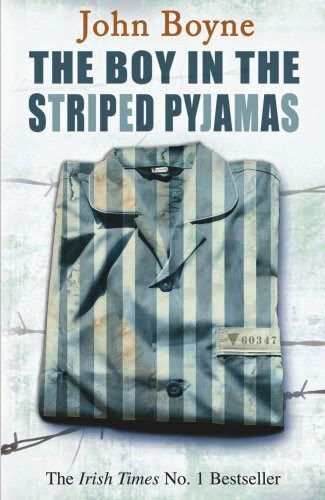 What happens when innocence is confronted by monstrous evil?

Nine-year-old Bruno knows nothing of the Final Solution and the Holocaust. He is oblivious to the appalling cruelties being inflicted on the people of Europe by his country. All he knows is that he has been moved from a comfortable home in Berlin to a house in a desolate area where there is nothing to do and no one to play with. Until he meets Shmuel, a boy who lives a strange parallel existence on the other side of the adjoining wire fence and who, like the other people there, wears a uniform of striped pyjamas.

Bruno's friendship with Shmuel will take him from innocence to revelation. And in exploring what he is unwittingly a part of, he will inevitably become subsumed by the terrible process.

My take on the book:
It has been sometime since I read anything like this. During the course of reading this book, I found out that there is a movie with the same name. So I had watched the movie right after reading the book. This book contains not only the review of the book - which, as per my knowledge, wouldn't contain much - but also the resemblances shared by the book and the movie. And considering these aspects, I try to weigh which of the two was best.

Before reading this book, from it's blurb, I had this idea: A small boy's family has shifted to elsewhere from their posh locality to a rural place. A sudden change in the environment, and the hostile ambiance leave the boy friendless and for the best part, bored. Until he makes a friend from other side of the fence. What does the fence signify? Border of the neighboring country? I didn't know.

Well, if you even have little grasp over the World History, Nazis and what the term Holocaust means, you are pretty ready for the book, unlike me, when I started reading it. When I started reading this book, I was as unaware of these general facts as a new born baby. I didn't know what Nazis did to the Jews; what was written in the Mein Kampf, to particularly evoke hatred in Nazis on the Jews; I knew the actual meaning of Holocaust from the dictionary, but I didn't know what historical event it referred, too. Well, I knew one such event - Jallianwala Bagh Massacre. But then it is a massacre. Does Holocaust and Massacre mean the same? So many questions! I started reading the book.

The language is one aspect of the book I most admire. It is narrated in a little boy's point of narrative, I guess, because there were no difficult words. The language was at its simplest best. I didn't know such miracle could be achieved by just using simple words and no difficult words. And also, with such simple expression the author portrays exactly the extreme feelings and emotions of the small boy. Just the way it should narrated.

The directed of the movie had taken enough liberties to rewrite the entire story to suit the adaptive version, which had violated various statements made by in the volume. Like for instance, the novel portrays no legible point of contact between the boys until the very last scene, and that they have never played during the course. But the movie depicts something entirely different. They play catch-ball from either sides of the fence and various other games.

In the book I didn't actually know what was going on the concentration camp. I know that Jews were treated harshly but what actually was happening was never in my knowledge. Among all these question marks, I had this doubt of what the word, Holocaust, had to do with the story itself! I completed the book, was totally touched by it. I know I loved it, but to confess the truth, I don't know what happened of the small boy at the end. I had a faint hint of what could have happened, but I was oblivious of the details and why, and also, how.

This is where the movie had done me a great good. Though, the screenplay was not specific to mention the details there was a dialogue that explained in all in a sentence.

There was a scene when the boy's mother gets out of the car and smells something horrid. As he looks in the way of the camp, she notices black smoke rising from the chimney from the camp. A officer, present beside the lady, noticing her twitching nose remarks, "They smell even worse when they burn, don't they?"

With that sentence, everything fell in place. Every aspect of the story, the cruelty of the Nazis, everything started to make sense. I really appreciate the movie for the way of revelation.

Overall, the book was a touchy, fantastic and extraordinary. The movie was okay, too...

Title: The Boy in the Striped Pyjamas