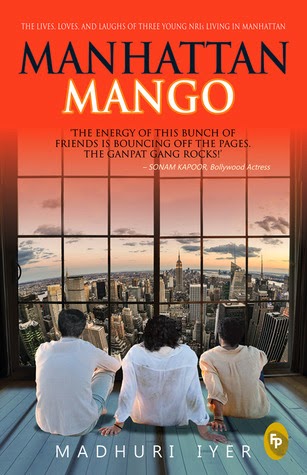 Zipping through life’s ups and downs like a high-speed elevator during rush hour, buddies Shri, Shanks, and Neel hold on to each other, and their sanity, with a bro-hood bonding that chipkos them together, fevicol se.

Neel’s the driven hedge fund guy, with a weakness for scotch and women. Tam Brahm Shanks, a techie, falls for the "wrong” girl. Good Son Shri, a banker, holds a secret he means to take to his grave. Their intertwined lives buzz with high-voltage drama — explosive secrets, super-charged romances, and a-fuse-a-minute meltdowns.

There’s alcohol-fueled passion, Devdas style. Inter-racial hook-ups. Even a fake affair, because money can’t buy the real thing. When their skyscraper-sized dreams are tested, this “desified” saga of friends in Manhattan is like the city’s rapid transit express subway line. You won’t want any stops in between.

My take on the book:
The very first line of the blurb made it clear that it is going to be a full-too desi, masala-filled read. Well, it indeed is.

I can't skip the topic of Publishers, here. Fingerprint Publishers. They are one of the best in the market if you ask me. Let me get done with my novel and I am ready to go head over heel to get it published by them. There is special reason, but it is just the feel of the publishers. If you ask me, A publisher could be judged by the covers of its books. Seriously, believe me. And FP has one of the best cover designs. Not to mention, they have published my all-time favourite book - The Virgins. Then start, not a book from them had disappointed me and I almost blindly accept their books for reviewing. FP Team, you are doing it just right. Keep it up.

A tiny name on cover of the book sounded pretty familiar. A comment written by someone about the book. Sonam Kapoor! How can that be just familiar! And on the backcover there are Rohit Roy, Sherman Joshi and Shashanka Ghosh. With all those Bollywood-related names the book gives a filmi feel to it. It is almost like you already know that the book is going to be filmi, even before you read it. I assure, it is just that, in a positive way. Don't assume that there are fights, dance in the rain and singing sort of stuff, but this is the story is a something filmi sans all those stuff. In fact, it is more like movies like Zindagi Na Milegi Dobara or Dil Chahta Hai.

Three friend. Meeting on a foreign land. And having loads of fun. Filmy, it is! Yeah!

The limited cast of characters have saved a labour for me. Reading the book, I was expecting a various number of characters which I straightly hate. It is hard for me remember them. The few characters used in the novel are so well-defined and fully-utilized that I hadn't a problem with them.

And then the language it was a bit desi with additions like yaar and other Hindi-words. But it was fine. Not the kind were there are tons of convos in Hindi, which often made me wonder whether I was reading a English book or a Hindi book written in English. The language of this book is pretty appealing. However, a reader needs to stress his mind in reading this book to completely enjoy it. It is often that I was reading and all of sudden I realise that I am not reading anymore and my thoughts have strayed a long way from the book. In other words, the language and narrative was good and appealing, but not captivating enough.

I was wondering at the end of the book, there was very little to do with Manhattan in the story. Not that I wanted to know something about the boroughs. The story could have set in any large city around the world.

Overall, it is breezy read with some interesting characters and a filmi plot...

Tagline: The lives, loves and laughs of three young NRIs living in Manhattan