The Celestial Hunt by Devikumar Ramalingam 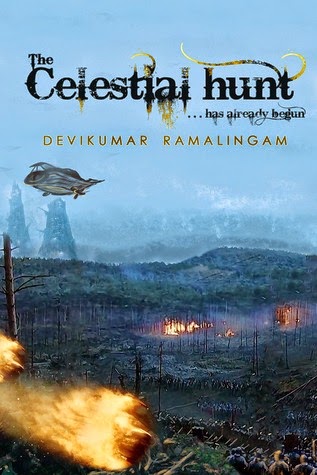 Millions of galaxies, countless stars, numerous planets and infinite asteroids and comets constitute this universe. Its formation is clueless and so is life. Earth, our dear world, which is one among the trillions of the celestial objects in this universe (we are not sure if we have another / many universes), is the only celestial object that can support life. We? Who are we?

We are just one among the innumerable species that live on Earth. When we compare the species of human beings to the hugeness of the Universe and the multitude of species, we seem very small. Is it not? This does not stop there. There are 7 billion humans in the world. You, I or anyone is just one among the 7 billion humans which is among 1.5 million species on Earth which is one of the trillions of celestial objects in the Universe.

Questions arise often when we start thinking about this mystery. So who has created this entire set up? And what are we expected to play in this short life? Are all the happenings and events pre-defined? Why some people alone reach greater heights in life and make their life a never fading saga?

Some term the super natural power above us as God and some try to explore it through science. Both God and Science have their own demerits. Yes, may be because both are created / altered by us. The ‘No God Concept’ seems to lack discernment and ‘Multi God Concept’ lacks sanity. Science, a repository of wonders, has also taken part in killing a large number of humans, the most intelligent species.

God (or) the Creator could be only ONE. All His messengers and their preachings iterate the same. The different versions of the result of the decoding process of God are these different religions. God Himself helped people in this process by sending Messengers at various times. The only identity for us is we are ‘humans’, very tiny living units of this gigantic universe created by our Creator. The discriminations originating on the basis of God has made us to lose our identity. Addicted to religion we have started moving away from God, our Creator.

Our only possessions are love & kindness – these attributes differentiate us from other species. The puzzling part is they increase when we give them to others. Do we all possess them? Not really! If we do, why are so many destitute and suffering people? Are we done with all our love & kindness that we don’t have any to assist these poor people? Poor? What is this new term?

Yes. Money is another term which is behind this term ‘Poor’. People with no/less money are poor and underprivileged people in this world. They are neglected of all the basic needs. Money is the transactional material ruling many greedy minds to live a rich life at the cost of hundreds of miserable lives. Greed of money drives one to pursue power and in the race many are killed in the stampede. Addicted to power & money, we are moving away from life. Triggered by communal differences and greed for power, and fuelled by science, violence has started reaching a new height and we are losing our face as humans.

The messengers of Our Creator have appeared several times and restored the love and humanity through their divine principles and everlasting life. We all carry a message from Our Creator and unfortunately many of us fail to follow and convey the doctrines to the next generation, thanks to addiction to religion, power and violence. We all hope a messenger appears again and turns this world which is full of nemesis into a garden of bliss. Every day, every one among the seven billion humans knowingly or unknowingly hope for a savior to save this tiniest of His celestial objects and one of His million species from self extinction.

“The Celestial Hunt” starts with Koushik, one among the seven billion humans taking a mysterious book from his father’s mini-library.

My take on the book:
This book marks the first of it's kind in our record. It is the first ever home-printed copy we ever accepted. To go into detail is a mess I don't want to get myself into. Basically, the author had self-published this book, which ran out and only a kindle version of it up and running. So we had to accept it home-printed as we love reading it on paper than any e-material.

Firstly I laughed at comparing the size of the blurb to the actual size of the book. The book seemed puny. Yeah, seriously, it is a novella, rather than a novel. Exactly as the kindle should be. Maybe instead of cramming the dialogues into one paragraph, if the author had presented the story is a customary way, it would have been more attractive. The very look of the huge paragraphs scares the shit out of the reader, believe me.

I had pretty high hopes on this book. Or else, I wouldn't have accepted it in the first place. The blurb offered a very interesting and thrilling story. A dystopian sort of story - my favourite genre.

The story must have been interesting, but I could catch up with it. The story keeps hopping all over the world. But from the very start it gets out of control to follow the plot. So many characters are introduced so abruptly that I had a tough time reading the book.

Now, as I think, I realise there are more flaws to the book than pros. So it is better I stop it here and end this review with a word of caution - or encouragement. This book is interesting if read with much patience which I clearly lack...