The Execution of Sherlock Holmes by Donald Thomas 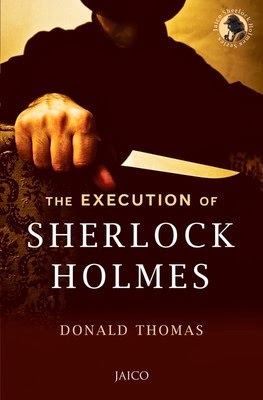 Drugged, manacled, condemned to a dank cell in the depths of Londons infamous Newgate prison, the worlds greatest literary detective awaits execution by a vengeful crew of formidable enemies. Escape is impossible; death, a certainty.

But not for Sherlock Holmes, who, in a stunning display of intellect and derring-do, will elude his hangmans noose and live to fiddle, spy and ratiocinate another day.

Against tremendous odds, Holmes will continue to defy his enemies in four more encounters, from cracking German intelligence codes, to going against Scotland Yard and the Crown in proving the innocence of a man condemned to death for the slaying of a pregnant serving girl, to an arsenic-wielding magician, and of course, to a battle of wits with the malevolent Moriarty. Everywhere in these five finely-wrought tales, riddles and mystery hover in the air. But they are not beyond the grasp of the incomparable Holmes.

Our review:
The cover picture of the book is pretty apt considering the title of the book. For the story, it is uncertain, for there are 5 stories in this book. The name of the first story is as same as the book's.

Like various other books we received from Jaico Publications, this book is also sent by Marina.

This is one of the three books, we received, in the Jaico Sherlock Holmes Series. The other two being,
This is last book I am reading. And I am disappointed. Of course, Sherlock was made to go under a lot of physical strain, but it is disheartening. The story was pacing at a snail's pace and I had a hard time keeping myself awake. Even the author's language was discouraging. Compared to this author's narration, I can say, I pretty much enjoyed Ted Niccardi's - author of The Lost Years of Sherlock Holmes - narration. It was quick, simple and intriguing.

Recommendations:
Recommended to Sherlock fans. Thriller seekers try something else.

Title: The Execution of Sherlock Holmes