The Virgins by Siddharth Tripathi 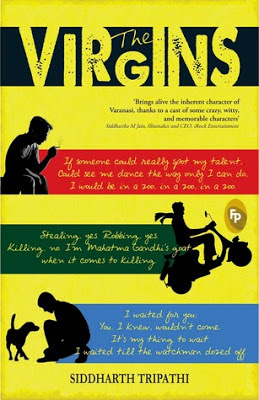 
I would like to start this review by thanking The Tales Pensieve Team for feeling me eligible to read this wonderful book.

I am more obliged for reading this book for the second time. Someone said, "So many books, so little time." I am firm believer of this quote. I am always on the run to read all the books and as many books as possible. In the run, there is little scope for a re-read. There are seldom a handful of books that I would like to give a re-read. And The Virgins is one of them, and it is the first which I had re-read.

Maybe that must have provided you the idea of what possible the books holds in me. However, for details scroll on...

Blurb (from the jacket):
How does one become a man?
Three young friends are about to find out.

With six unmarried sisters and a perennially drunk father, Pinku, a 19-year-old school dropout, has only one dream left: to marry the plump girl who’d caught him stealing flowerpots. His friend and confidant, 17-year-old Bhandu, is not faring any better — his parents are divorcing, his father has abandoned him, and the American tourist he is infatuated with doesn’t even know he exists. Bhandu and Pinku seek solace in the distracting shenanigans of their friend Guggi — a pampered rich brat who can do anything for a thrill. Guggi’s reckless hedonism lands the threesome in a series of 'sexpot' escapades — each adventure weirder than the one before.

But their seemingly innocuous joyride is about to end.

With their Class 12 exams around the corner, Guggi, restless to leave a mark, takes over the school’s notorious protection racket in a violent coup. The fallout drags the trio into a murky world of heartbreak, betrayal, and bloody vengeance . . .

Fast, funny, and earthy, The Virgins is a coming-of-age novel that marks the debut of a promising writer.

About the author (from the jacket):
Siddharth Tripathi was born in Allahabad and schooled in Banaras. He is a B.E from NIT Trichy and an MBA from MDI, Gurgaon. Siddharth currently lives in Gurgaon and works as a consultant for a business advisory firm. He also writes a blog on music and films. The Virgins is his first novel.

Our review:
Whenever I look at this book I cant help picking it up, feeling its cover and smelling the pages. This is the first book I've read by Finger Print Publishers. I must say, they had made a pretty solid impression on me for every aspect about this book is exquisite.

The cover design, as you can see, it very appealing. The colour selection of the author - or whoever chose the cover design - is pretty. But it is just the first part. The back cover is even more appealing. Above all the the pencil sketch-like portrait of the Dashashwamedh Ghat of Varanasi. 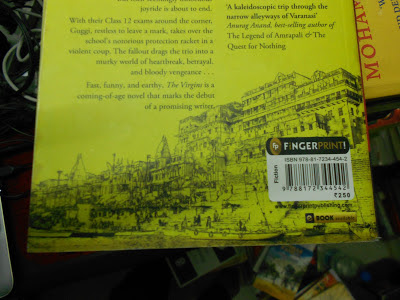 A perfect-ten. My most favourite Cover Design yet!

The next best aspect about the books is its language. I formal, occasionally senseless, dialogues; the narrative; the Hindi expletives; frequent use of Hindi; almost everything was very ... very ... perfect. There were some books where the use of Hindi had irritated me no end. Come on, man, you are writing an English novel. Why do you use Hindi dialogues? But in this book, it was never out of place. In fact, I felt like those Hindi dialogues had poured life into the story.

The crudeness just added to the realness of the story.

On the whole, the story was good. Actually the story can be broken in fewer aspects which were very appeasing.

Firstly, the backdrop of the story. It is a teen story. It could have taken place anywhere. Most of the contemporary novels that adore the bookstore are either based in Mumbai or in Delhi. Or sometimes in Bangalore. But it is a rare-gem to come across a contemporary novel, which is based in Banaras! The way in which the author described the city and its inhabitants is awesome. It invokes in me the desire to visit the city sometime soon.

It is the story of three teens - Pinku, Bhandu, Guggi - and their adventures. Or rather misadventures. That is what I can say about the story, without giving much details because the book is way more than what the blurb says. You have to read the book to feel its pull. Maybe that is the reason why even the front-cover of the book carries a part of the blurb.

Final verdict:
I want to end this review on a very good not, that the book is. I say, you read it. You will not regret the money bucks spent on it. Like they say, this book is a full too paisa vasul kinda book.