The Lost Years of Sherlock Holmes by Ted Riccardi 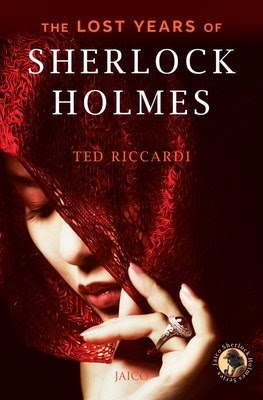 This is one of the three Sherlock Holmes books I have received from Marina, of Jaico Publications.

The other two books of the Jaico Sherlock Holmes Series,
I had already read and reviewed New Adventures of Sherlock Holmes. That leaves me with only two other books. From the remaining, I guessed that the other one was about the execution of Sherlock Holmes, so I have selected this book to read first.


From the Fertile Crescent to the Far Fast, the untold adventures of Sherlock Holmes during the three-year gap between his death and dramatic return.

Sherlock Holmes is dead or so most of the world thinks. His fatal plunge over the Reichenbach Falls as he struggled with his archenemy, Moriarty, has been widely reported.

But Holmes has escaped and is alive.

From 1891 to 1894, Holmes wanders through Asia. He is alone, without Watson, without Scotland Yard, armed only with his physical strength and his revered cold logic and rationality. The adventures recounted in The Lost Years of Sherlock Holmes range from Lhasa to Katmandu, from the East Indies to the deserts of Rajasthan. He confronts the tsarist agent Dorjiloff, the great art thief Anton Furer, and the mysterious Captain Fantme. For Holmess fans throughout the world, the stories in The Lost Years of Sherlock Holmes fill an enigmatic missing chapter in the great detectives career.

Our review:
The cover picture of this book is not as appealing as the prior one's - New Adventures of SH. However, both of them shared a same blend of theme.

Two of the three from Jaico Sherlock Holmes Series are authored by Donald Thomas. Only this one is authored by Ted Riccardi. So there was a complete change in almost all the aspects of the narration.

When I first read the Preface in the book which was narrated by Dr Watson, I couldn't help but marvel at the idea of the book. Earlier, from a TV series, I had learnt that Holmes was killed by falling off into some water falls before making a miraculous, dramatic reappearance. That was my knowledge. From this book, I learnt that Holmes was away between 1981 and 1984. And this book is his story between that time. Where he had been? What he had done?

It was very fascinating how the author carved the story.It was even more fascinating to learn that in these stories Sherlock had spent those lost years in India, travelling and solving mysteries. Mostly ending his enemies who had taken upon themselves to end him, instead.

This book contains nine stories during those lost years in the detective's career. Each taking place at different destinations in India. The vividness in the description of the Indian town by author was splendid. For that aspect the author had won a great deal of my fascination.